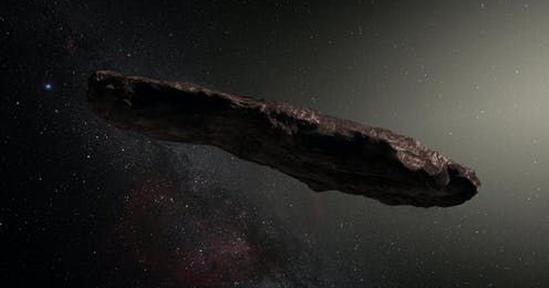 ‘One of your responses to these criticisms was, “I follow the maxim of Sherlock Holmes: ‘When you have excluded the impossible, whatever remains, however improbable, must be the truth.’ ” But when it comes to things we can’t explain or don’t understand, don’t we often turn to concepts that do exist in popular culture and society—

No. No! No. Let me give you a better example for the kind of argument you are making. The multiverse is a mainstream idea—that anything that can happen will happen an infinite number of times. And I think that is not scientific, because it cannot be tested. Whereas the next time we see an object like this one, we can contemplate taking a photograph. My motivation, in part, is to motivate the scientific community to collect more data on the next object rather than argue a priori that they know the answer. In the multiverse case, we have no way of testing it, and everyone is happy to say, “Ya!” Another mainstream idea is the extra dimension. You see that in string theory, which gets a lot of good press, and awards are given to members of that community. Not only has it not been tested empirically for almost forty years now but there is no hope it will be tested in the next forty years. And yet your friend has no problem with that! Whoever you are quoting has no problem with the multiverse, with string theory. No problem!

We don’t know what the person, Coryn Bailer-Jones, thinks about these things, to be clear.

He never complains about it, he never mentions it.

The point I was trying to make is that we live in a culture where people talk about aliens.

No, but that’s different.’

We live in a culture where people talk about aliens, where some people are convinced that they are abducted by aliens, and where in the near future you can decide to identify as an alien. Something I’m in favor of.

Freedom is leaving the human race without dying. But not to avoid responsibilities of course.