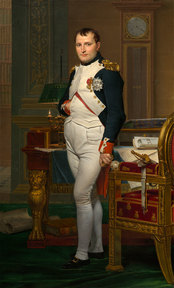 (A friend sent me the article with the comment ‘French battles’.)

‘That echo, in mainland France, can seem faint. Fascination with Napoleon appears more potent than ever, as if, in a time of pandemic-induced uncertainty, he embodies everything France feels it has lost. Napoleon’s life remains a parable for many people, including Mr. Macron, of national action, and grandeur — flawed, no doubt, violent without question, but transformative.’

‘Mr. Macron’s choice is both political and personal. With the left in tatters, his main challenge is from the right, so laying a wreath at Napoleon’s tomb is also a way to counter Ms. Le Pen. But his own fascination with Napoleon — like him, a young provincial upstart who came to power from nowhere with a mission to remake France and change Europe — has long been evident in his recurrent musings on France’s need for “renewed ambition and audacity.” “Macron is Rastignac,” said Nicole Bacharan, a political scientist, alluding to the hero of a Balzac novel who conquers Paris with his charm and guile. “And in the literary, political, strategic, military and intellectual range of Napoleon he finds a source of inspiration.” So, too, in the fact that France was then “the center of the world, for better or worse.”’

‘Elisabeth Moreno, the minister of equalities in France, has called Napoleon “one of the great misogynists.” The Napoleonic Code, long since amended, said “a woman owes obedience to her husband,” not an uncommon view at the time.
François-René de Chateaubriand, the 19th-century French writer and diplomat, observed of Napoleon that, “Living, he failed the world. Dead, he conquered it.” Something in his extraordinary orbit from imperial glory to the windswept island of his death will not let the French imagination be. The reason may be Napoleon’s hard-earned realism, as expressed on St. Helena to his secretary, Emmanuel de Las Cases.
“Revolution is one of the greatest ills with which the heavens can afflict the earth,” Napoleon told his aide. “It is the scourge of the generation that makes it; any gains it procures cannot offset the distress it spreads through life. It enriches the poor, who are not satisfied; it impoverishes the rich, who will never forget it. It overturns everything, makes everyone unhappy, and procures happiness for nobody.”’

If Macron turns out to be one of Balzac’s heroes we must fear for France, and for Europe. Literature will thrive, but at what cost?

To be an anti-revolutionary in 2021 makes sense, any revolution that will spread nowadays will turn out be an ill, we must be thankful that the revolutionaries of today do not much but paying lip service to the revolution. (The beautiful city of Portland might be an exception.)

On the other hand, the demise of the left in France, and not only there, is not a very good sign.
If the left is disgruntled enough to alienate a rather huge part of its voters the extreme-right will win. History almost never repeats itself, this is still true.