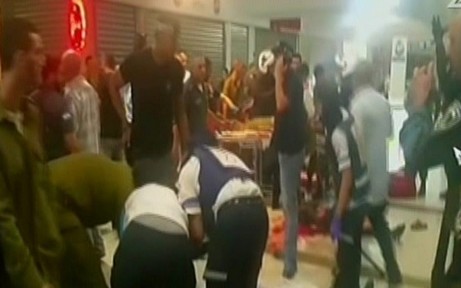 On blood and victory – Gideon Levy in Haaretz:

‘The security mavens want as much war as possible because in their heart of hearts they like wars, those are their strongest memories. A war that is never enough for them, just to hit them, to prove that we’re strong. All the wars in Gaza and Lebanon, which didn’t accomplish anything, didn’t teach them anything either. They stick to their guns. If only we had listened to them at the time, there would have been tens of thousands of dead, and only then would the desired victory have been attained, which will never be attained.’

‘The statesmanlike journalist Danny Kushmaro, who ordinarily won’t reveal his opinion about anything, innocently asks: “Why does Yihya Sinwar [Hamas leader in the Gaza Strip] still have a home?” If only people would listen to the voice of the man on the motorcycle, Sinwar would no longer have a home, a wife, children, neighbors, like all his deceased predecessors, and then we would win.
Of course we would win. From journalists Nahum Barnea (“hit hard, forcefully”) to Roni Daniel (“Let’s stop being amazed by some sight or other”) and Amir Buhbut (“That’s not how to land a harsh, painful blow”), every guy can be a soldier, they all want only more and more combat action by men’s men who never cry, not even at night. They sit on the hilltops surrounding Gaza like a chorus of cheerleaders and cheer the forces who will kill civilians and fighters in the penned-in ghetto, just give them more and more.’

‘“Two Arabs were killed in Lod by a missile launched by Hamas. I call that poetic justice. … Too bad it was only two,” tweeted journalist Shimon Riklin on Wednesday regarding the killing of two Israelis, a father and his daughter. “Why don’t they reduce the electricity in Gaza to 10 percent? Let them sit in the dark and suffer. Let them stand in the heat and suffer, and in general let them suffer.” Riklin has an objective, which is both a contemptible war crime and pointless as well. Ben Caspit, on the other hand, is presumably a centrist journalist, and he screamed at the imam of Lod: “We really have to hit you hard, and show you who’s the boss here, show you that you don’t burn anything belonging to Jews in Israel.”’

Levy might be a tad too pessimistic, but of course he has a point.
And Israel is not an exception, unless you thought, like George Steiner did that Jews are morally better than most other people. (Steiner himself declared that this belief was racist, but this latter remark might have been slightly ironic.)

The implosion of the left, the radicalization of the so-called middle, the open or not so open disgust of democracy, religious and ideological zealousness and the real rockets and drones from Gaza or Lebanon are a standing invitation to primitive behavior, to the rule of the mob.
Sometimes, intellectuals or so-called intellectuals defend these reflexes as realism, and again Israel is not unique. Look at France, US, Germany, the Netherlands. We can see the same impulses there, but without rockets, without the uncertainty of the overdue question: what are the borders of this country? So less widespread, more subdued. The population is not yet as unhinged as in Israel.

If you want to show others who is the boss, if that’s the attitude that enables peacefully living together, society is already on the verge of breakdown.