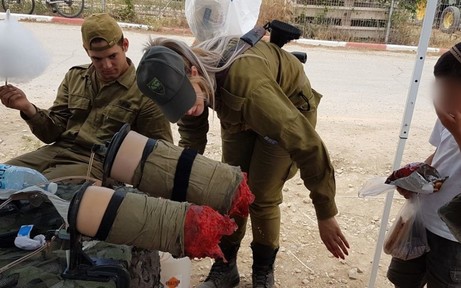 On strategies and the press – Amir Tibon and Allison Kaplan Sommer Haaretz:

‘Shortly after midnight on Friday, leading international news outlets released breaking news updates saying that Israel Defense Forces ground troops had entered Gaza. The development, which made top headlines all over the world, was described as a major escalation in the ongoing conflict between Israel and Hamas.
But within hours, all of these outlets retracted those reports. In conversations with Haaretz, several foreign correspondents working in Israel described how they were told on the record by the IDF Spokesperson’s Unit that a ground invasion had begun – only to later receive a retraction and apology from the military for the misleading information. The IDF Spokesperson, Brig. Gen. Hidai Zilberman, told Israel's Kan Radio that there “could have been a mistake” in how the military described the situation to the foreign media.’

At 12:17 A.M. Israel time, the IDF Spokesperson’s Unit sent a WhatsApp message to a group of foreign correspondents based in Israel, informing them on the record that ground troops are operating inside Gaza. A short time after issuing the briefings, the IDF began pummeling targets in Gaza from the air, sending out 160 warplanes that dropped approximately 450 bombs.’

‘As a result of these messages and phone briefings, leading newspapers, news websites and television and radio stations in the United States and elsewhere pushed breaking news alerts about an Israeli ground invasion. These reports were also picked up by Israeli news outlets, who were surprised to learn about such a dramatic development from foreign sources.

But when military reporters for Israeli news outlets reached out to the IDF for comment and confirmation, they received a very different answer: no, there is no ground invasion into Gaza. This led to confusion on social media, where foreign correspondents, quoting the IDF, said there is an ongoing ground invasion, while Israeli correspondents, also quoting the military, said the opposite.’

‘In Israel, emerging social media reports say that the IDF's report of a ground incursion was intended to draw Hamas militants into the organization's underground tunnel network, which were then targeted in heavy airstrikes, using the military's direct line to international journalists as a means of attack against Hamas.
An American journalist who reported from Israel told Haaretz that the incident "will not help" Israel's relationship with international media. "It looks awfully transparent," the journalist said, "the idea that they misled people only in English, that Conricus personally said it was so, without any caveats or promises to check, and the timing right before a big attack on the tunnels."’

Chief of the General Staff Kochavi likes theatrical tactics in order to deceive the enemy.
Read this article on BBC. The Israeli army had put on a show of evacuating wounded soldiers near the Lebanese border in order ‘to give Hezbollah the impression that its anti-tank missile attack - which the army said targeted a border outpost and armoured military vehicle - had succeeded in causing casualties, leading it to suspend further fire.’

In the meantime, we are heading for a prolongation of the status quo with needless suffering and bloodshed.
If enough citizens on both sides are not willing to support their leaders anymore and their fruitless confrontations and their anti-democratic and illiberal way of governing, especially on the Israeli side, we may see a change. But I’m not very optimistic.
The peaceniks faded away and the new peaceniks are not yet very powerful or organized. And violence always makes the peaceniks look dumb, naive and out of touch with reality.