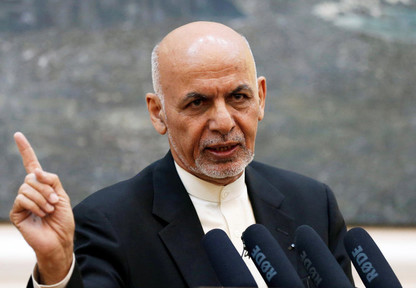 On being friend and foe at the same time – an interview with Ashraf Ghani in der Spiegel (Susanne Koelbl):

‘DER SPIEGEL: What influence does the Pakistani government have on the Taliban's fighting? Ghani: Pakistan operates an organized system of support. The Taliban receive logistics there, their finances are there and recruitment is there. The names of the various decision-making bodies of the Taliban are Quetta Shura, Miramshah Shura and Peshawar Shura – named after the Pakistani cities where they are located. There is a deep relationship with the state.

DER SPIEGEL: Why didn't the Americans intervene earlier in Pakistan to weaken the Taliban's clout? Ghani: You’ll have to ask the Americans that. I can empirically say that they depended very heavily on getting supplies and logistics through Pakistan.
DER SPIEGEL: Why should Pakistan change its strategy – now, of all times – when it is so close to the finish line, and when the country would soon be able to determine the course of Kabul via the Taliban? Ghani: My visitor from Pakistan yesterday, Army Chief General Qamar Bajwa, clearly assured me that the restoration of the Emirate or dictatorship by the Taliban is not in anybody’s interest in the region, especially Pakistan. However, he said, some of the lower levels in the army still hold the opposite opinion in certain cases. It is primarily a question of political will.’

Already in 2006 and 2007 I was told by Dutch army offers and officers belonging to other NATO countries that Pakistan has been playing a double game for years.

Since then, apparently not much has changed.

And apparently America can live very with this double game.

Mr. Ghani said in this interview: ‘But Afghanistan is not South Vietnam, and I did not come here in a coup.’

No, it’s net South Vietnam, but Mr. Ghani despite all his denials fears that his life might end as the life of ‘collaborator’ in Vietnam.
Left to his own devices and killed.