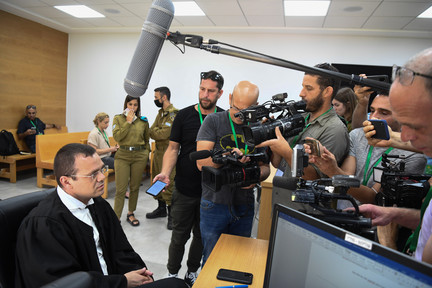 ‘The arrest and death of a military intelligence officer, with only parts of the affair released from a gag order on Monday evening, appears to have been a long, tragic saga. The IDF, according to the accumulating evidence, made mistakes in its handling of the officer and, indeed, the entire affair. The prolonged, comprehensive gag order on the details of the affair, particularly in the three weeks following the officer’s death while under detention, sparked a wave of fragmented information and false rumors, which spread throughout the country and from there, in a disjointed fashion, to international media outlets.
The attempt to impose a total gag order, even when done for the sake of protecting sensitive security information, greatly aggravated the problem. Since the affair seems to reveal suspected failures on the part of the military system, the sweeping ban was perceived as an attempt to shove things under the carpet. The attempt to keep the stable doors shut after many of the horses (i.e., secrets) had fled reflects a lack of understanding of the reality of current modes of media operation, and of the impact of social media on media reports and the pace at which things move today.
The officer was detained on suspicion of committing grave transgressions, with the potential and actual damage to state security deemed to be particularly heavy. After intense media pressure, the IDF said last week that suspicions did not include treason, espionage or contact with a foreign agent. As revealed on Monday, the officer operated out of personal motives that were not, as the army defined them, “ideological, ultra-nationalist or financial.” The man’s acquaintances describe him as having exceptional capabilities, and the fact that he served in a technological unit allows one to imagine the parameters in which the damage was done.’

‘The circumstances of the officer’s death are still unclear. A few months ago, he was transferred to a new prison. The IDF boasted about the improved conditions in this facility and the up-to-date network of surveillance cameras meant to prevent abuse or suicide. And yet, even though this affair is particularly sensitive, the officer collapsed under the eyes of his jailers.
Work conditions and the atmosphere in his unit, the degree of oversight of its operations, what transpired inside the prison, all of these point to mistakes and failure on the part of the army. The IDF response, as soon as suspicions surfaced, was total silencing. A sweeping gag order was imposed and the family was intimidated to prevent any scrap of information from leaking out. Not only did this not work, it continued after the man’s death, when details were concealed from his family.’

‘The IDF must protect its sensitive information, but it must also give an accounting to the family and public. The fact that a temporary solution was found on Monday shows that with more effort and understanding, it could have been reached earlier. The information released so far is not sufficient, and there is certainly no justification for concealing the officer’s name for security reasons, days after it was revealed in foreign and on social media.’

Why is this affair more sensitive than other affairs?

What were the ‘personal motives’ of the brilliant intel officer to transgress?

How did the officer die?

And intimidating family members of a deceased officer part of the gag order?

A gag order to prevent journalists reporting about mistakes made by the army doesn’t belong in a democracy, not even in a not so well functioning democracy, and besides that, it’s counter productive.