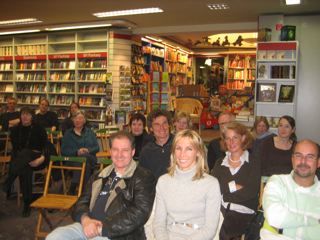 The Dutch politician Geert Wilders and his film, which nobody has seen yet, were rewarded with four articles in today’s Herald Tribune. And see also this article by Peter van Ham and this one by Tulin Daloglu and David Pollock and this one by Shaykh Hamza Yusuf Hansona, Din Syamsuddin and Prince Hassan bin Tala and also this article by Christopher Wolf.
Whatever the ethical and esthetical questions are that his film and his persona might provoke, all marketing-experts should study him closely.
I’m on a reading tour in Germany. As I did last year I’ll try each night to photograph the audience or at least part of it and I will give each reading a mark from 1 to 10.
The reading tonight at bookstore Vaternahm in Kassel gets a 7. The owner of this bookstore – actually a chain of bookstores – spoke about his wife who is on the verge of delivering her second child. Nevertheless the owner – a charming man who slightly resembled a rock star or at least the manager of a rock star – took me afterwards to a small bistro where he explained his philosophy regarding bookselling.
And one woman impressed me by asking if she could have my red sweater for her son.