Play with the phone 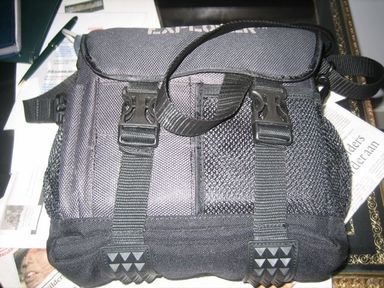 Last night I went to Rotterdam (where I had dinner with my assistant and my amante in an excellent restaurant called Zinc) to pick up my satellite phone, which I’m going to use in Iraq.
At the NRC Handelsblad (a Dutch newspaper for which I have been contributing since 1994 on a regular basis) headquarters in Rotterdam, one of the more depressing buildings in one of the more depressing neighborhoods, I had to call a guy named Dan.
Dan came downstairs, picked me up; gave me the satellite phone and asked me: “When are you going to Iraq actually?” We took the elevator down again. “Play with the phone and let me know how it goes,” he said.
In the lobby he started a conversation: “I saw your article in today’s newspaper. What kind of gun were you holding?” He was referring to a picture posted on this site as well.
“A M-16,” I said.
Then I went to the restaurant with my satellite phone.
The last time I used such a phone, in Argentina and Paraguay in 2006, it became pure slapstick.
Pictures are available upon request.