What kind of man are you 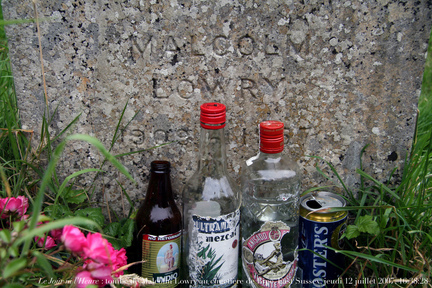 In the last issue of the NYRB Michael Wood reviews “The Voyage That Never Ends: Fictions, Poems, Fragments, Letters” by Malcolm Lowry. He starts his essay with a telling anecdote: ‘The biographer Douglas Day recounts an episode in the later life of Malcolm Lowry. The novelist visits a neighbor on the western coast of Canada, a carpenter. The man has several children, one of whom is severely retarded. Lowry stares at the child for a while and finally says to the father, “What kind of man are you if this is the sort of kid you produce?” The carpenter hits Lowry in the face and throws him out.
Lowry was drunk, of course, indeed at most stages of his life he was rarely entirely sober, and we can recognize and even understand the intricate self-loathing that lies behind such a remark.’ I wonder if self-loathing can be used as defense for such a remark. I have nothing against provocations, or against self-loathing for that matter, and we al look for weak spots in our enemies or in those we perceive as enemy, but I would prefer to leave retarded children out if it. Even if I were an alcoholic and a genius.