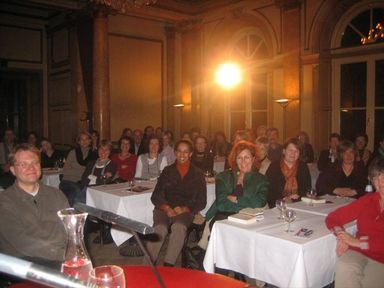 A curious report in today’s IHT about Dutch marines training in Suriname: ‘"Some 70 percent of the world's conflicts in the last 30 years have occurred in jungle areas," said Major Eric Piwek, 34, who brought the 31st infantry company of the Dutch Marines here from their base in the Netherlands Antilles. "Thus, we must be prepared to go into these unfortunate places to help sort things out." Toughening up the Dutch military for missions abroad became a priority after Dutch soldiers serving with the United Nations in Srebenica were widely vilified for allowing Serbs to massacre about 8,000 Bosnian Muslims in 1995, Europe's largest mass murder since World War II.’ I wonder for what kind of peacekeeping mission this toughening up is meant.
The reading tonight gets an 8.5. My experiences with audiences in Hamburg have been very pleasant; tonight was no exception. And the "Literaturhaus" in Hamburg is based in a beautiful building, with a restaurant that is popular, especially for breakfast, according to the director of the "Literaturhaus." The pasta I was served gets a 7.
While having dinner after the reading one of the ladies present suggested a game. Each of the participants in the game receives a sentence, which he or she should say to a stranger within seven days. 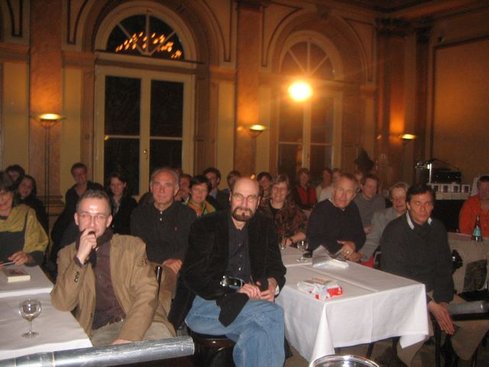