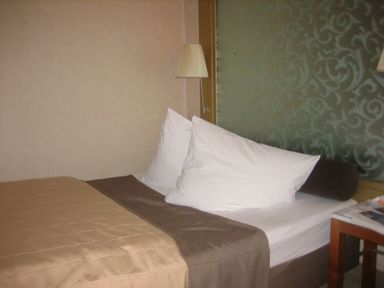 Otto Brües is a not very well-known German author. The event tonight in Krefeld took place in the house where he lived after World War II and where he died in 1967.
His daughter, Eva, turned her father's house into a small museum, which is also being used for literary events. Actually she donated the house to the city of Krefeld, but as she said to me tonight: “As long as I’m alive, the city of Krefeld allows me to live here.” The reading and the discussion were being held in the living room of Eva Brües.
The boyfriend of the assistant to the organizer explained to me after the reading that he was a clown. He had studied mathematics and sport – I didn’t know you could study sport – after a few detours he decided that he wanted to be a clown, but a clown without a mask.
He doesn’t belong to a circus and I’m not sure if he really aspires to be part of a circus. My feeling is that he wants to be a private clown. Because of him and the peculiar but heartwarming Eva Brües the event is rewarded with an 8.
I forgot my camera tonight, so instead of a picture of the audience a picture of my bed in the Dorint Hotel in Mönchengladbach.