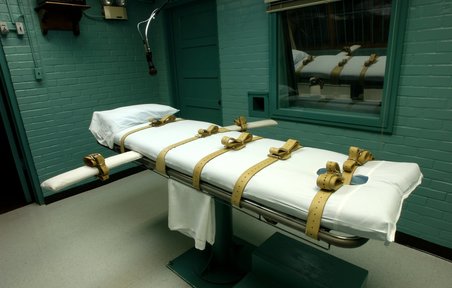 On the act of killing and spiritual advisers – Adam Liptak in NYT:

‘The Supreme Court on Wednesday stayed the execution of a Texas inmate whose request that his pastor be able to touch and pray aloud with him in the death chamber had been rejected by prison authorities.
The court also agreed to review the case on its merits, without noted dissents. The court’s brief order said the case would be argued in October or November.
The stay was the latest in a string of Supreme Court rulings on the role that spiritual advisers may play in death row inmates’ final moments.
The new case concerned John Henry Ramirez, who was sentenced to death for the 2004 murder of a convenience store worker. Mr. Ramirez stabbed the worker, Pablo Castro, 29 times in a robbery that yielded $1.25.
In prison, Mr. Ramirez forged a relationship with Dana Moore, the pastor of Second Baptist Church in Corpus Christi. Mr. Ramirez asked that his pastor be allowed to hold his hand or touch his shoulder or foot and to pray out loud with him as he dies.’

‘In urging the justices to deny a stay of execution, Ken Paxton, Texas’ attorney general, a Republican, said Mr. Ramirez had engaged in litigation gamesmanship. For instance, Mr. Paxton wrote, Mr. Ramirez had at one point asked only that his pastor be present and need not touch him.
The Supreme Court has taken a variety of approaches to suits in which death row inmates asked that their spiritual advisers be present to comfort them during their executions, In 2019, for instance, the court allowed by a 5-to-4 vote the execution of an Alabama inmate, Domineque Ray, a Muslim whose request that his imam be present had been denied. At the time, Alabama allowed only a Christian chaplain employed by the prison system to offer spiritual guidance to condemned inmates during their last moments.
Justice Elena Kagan, writing for the dissenters in 2019, said the majority was “profoundly wrong.” Under Alabama’s policy, she wrote, “a Christian prisoner may have a minister of his own faith accompany him into the execution chamber to say his last rites.” “But if an inmate practices a different religion — whether Islam, Judaism or any other — he may not die with a minister of his own faith by his side,” Justice Kagan wrote.’

‘Justice Kavanaugh added some practical advice.
“States that want to avoid months or years of litigation delays,” he wrote, “should figure out a way to allow spiritual advisers into the execution room, as other states and the federal government have done. Doing so not only would satisfy inmates’ requests, but also would avoid still further delays and bring long overdue closure for victims’ families.”’

One could ask if somebody stabs another person 29 times for a robbery of $1.25 he is mentally capable to make sound decisions. Wouldn’t be an asylum (compulsory treatment) the better solution? But this aside.

There is in the wording of several judges, in this article, a slight perversity to be found, the slight absurdity, that the state can kill its own citizens in a human manner. With a minister of their choice at their side who might hold the feet of the condemned. So we can think: all is well.

Needless to say, I’m in favor of all sorts of comfort for those who are going to be executed. But the idea that the act of killing can be performed as if it is just another medical procedure is also the denial of the cruelty of the machine that the state too often is, a machine that crushes human beings.

I remember my time in the slaughterhouse, the moment the act of killing becomes repetitive, the cruelty slowly disappears.