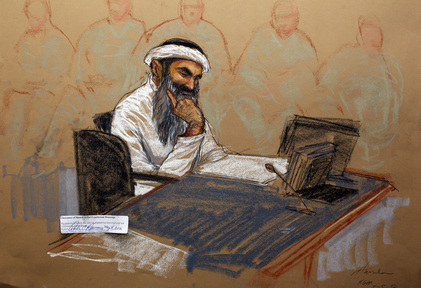 This article by Terry McDermott about Khalid Sheikh Mohammed, mastermind of 9/11, published in the in The New Yorker 2010, is worth reading or rereading:

‘Since June, 2002, when U.S. officials first identified Mohammed as the “mastermind” of 9/11, he has become one of history’s most famous criminals. Yet, unlike Osama bin Laden, he has remained essentially unknown. Efforts to uncover more than the outlines of his biography have produced sketchy and sometimes contradictory results. (These include my own, for my book “Perfect Soldiers,” published in 2005.) Even basic facts have been in doubt; there are, for example, at least three versions of his birth date. For almost the entire decade before he was captured, in early 2003, Mohammed was a fugitive, deliberately obscuring his tracks. Bin Laden, meanwhile, was hosting television interviewers, giving speeches, and distributing videos and text versions of his proclamations to whoever would have them.
Insofar as we know Mohammed, we see him as a brilliant behind-the-scenes tactician and a resolute ideologue. As it turns out, he is earthy, slick in a way, but naïve, and seemingly motivated as much by pathology as by ideology. Fouda describes Mohammed’s Arabic as crude and colloquial and his knowledge of Islamic texts as almost nonexistent. A journalist who observed Mohammed’s appearance at one of the Guantánamo hearings likened his voluble performance to that of a Pakistani Jackie Mason. A college classmate said that he was an eager participant in impromptu skits and plays. A man who knew him from a mosque in Doha talked about his quick wit and chatty, glad-handing style. He was an operator.’

‘The frustrations were compounded by events elsewhere. In August, 1990, Iraq invaded Kuwait; by early the following year, an American-led counterattack had forced it to retreat. Many of the mujahideen experienced this as a further insult. Bin Laden, in particular, was infuriated, claiming that the Saudis, by allowing the U.S. to base its soldiers in the kingdom, were violating a dictate to keep infidels out of the “land of the two holy mosques.” Then, in October, the American government announced military and economic sanctions against Pakistan, which had just been revealed to have a nuclear-weapons program. Those who thought that the U.S. had abandoned their cause took this as additional evidence.
Many of the original Arab mujahideen were gone, including bin Laden, who had gone home to Saudi Arabia in 1989, leaving behind a fledgling Al Qaeda to coördinate jihad activities. Zahed stopped working for L.D.I. and went to the United Arab Emirates. (He was deported from the U.A.E. in 1998 for his involvement with the Muslim Brotherhood, and moved to Bahrain, where he now works as an executive at a large business conglomerate. When I found him there this spring, at a spacious house, with children’s toys and bicycles strewn around outside, he threatened to sue me for invading his privacy.) Mohammed, with the sponsorship of a member of the ruling family of Qatar, Abdullah bin Khalid al-Thani, moved his family to Doha, the capital. At a farmhouse outside of town, Thani provided what amounted to a hostel for former mujahideen. An American government official in the region at the time recalled that Thani told him, “These people went out there and fought for their faith and now they’ve been abandoned by their countries and I feel sorry for them.”’

‘Mohammed and Basit were almost indiscriminately ambitious. In addition to blowing up a dozen airliners and killing the Pope and the American President, their plots included assassinations in Pakistan and the Philippines, a bombing in Iran, and attacks on consulates in Pakistan and Thailand, among many others. In one of his Guantánamo statements, Mohammed listed thirty-one terror plots to which he was party. There doesn’t seem to have been much of a plan uniting them. Basit and Mohammed were not criminal masterminds in the conventional sense; they did not sit back and coolly plan attacks. Instead, they reeled from plot to plot as if they were more interested in action—any action—than in its import. They murdered even in the course of practicing for their attacks. When Basit was captured, in February, 1995, he had a bunch of children’s toys stuffed with explosive materials. When Mohammed was arrested in Pakistan, eight years later, he had numerous new plots in various stages of execution, despite having already pulled off the biggest terror attack in history.’

‘Mohammed was a hands-off manager; he spent most of his time trying to recruit suitable volunteers and, once he had done so, gave them instructions and expected them to perform. He delegated the details of the plot—which flights, what day, the makeup of the hit teams—to Atta, who communicated his decisions to Mohammed through bin al-Shibh, mainly using coded e-mail exchanges and Internet chat rooms. While the pilots were being trained, Mohammed continued searching for men to join them in the United States. Most of those he found were Saudis who, like the pilots, had gone to Afghanistan to volunteer, and carried passports that allowed them easy access to the U.S.’

‘In the spring of 2003, almost a full decade after Mohammed came to the notice of terrorism investigators, heavily armed Pakistani police crashed in on him in the middle of the night, in a walled compound in Rawalpindi, the home city of Pakistan’s military. His capture likely owed something to the technical capacities of American surveillance, but the big break came by the oldest of means: betrayal. The U.S. had offered a twenty-five-million-dollar reward for Mohammed’s capture, and a cousin tipped off authorities about his location. The man, an Iranian Baluchi, has been resettled with his money, presumably in the United States. “Even his family is his enemy now,” a Pakistani relative said of the cousin. “His father says, ‘If he returns, we will kill him.’ ” It is an article of faith among Mohammed’s family members, several of whom have been arrested on suspicion of coöperating with him, that he has been falsely accused. “Just think about it,” the cousin said. “How can it be that such a big tower, merely by being hit by a plane, it gets demolished? At the very least, something has been placed at its foundation which would cause the collapse. This was a Jewish conspiracy.” Relatives have gone to court to reverse what they allege was Pakistan’s illegal extradition of Mohammed to American authorities, but his wife has asked them to stop their efforts. The cousin said she told him, “It’s in God’s hands.”’

‘When another defendant, Ramzi bin al-Shibh, initially refused to appear before tribunals at all, it was not military prosecutors or lawyers who changed his mind but Mohammed. He organized what he called a Shura council to coördinate his defense with those of his fellow-accused. He dealt politely with his defense lawyers, although he is prone to giving lectures in court. According to the Times, he wrote poems to the wife of one of his interrogators. He has at times captivated interrogators with what amount to master classes in the practice of contemporary terrorism.
It’s likely that, whenever and wherever Khalid Sheikh Mohammed goes on trial, the answers he provides to the enduring questions about 9/11 will be deeply unsatisfying. His plots were scattered, frenetic, even feral; they had an almost random quality. Mohammed, almost certainly, will talk. He likes to talk. It is less certain that he will have anything to say. The mastermind of 9/11 seems to have had no grand strategy, or, really, any strategy at all.’

Family is holy, but for 25 million dollars the shine of the holiness fades quickly.

Ideology once again is often lust for action, and the absence of a grand, or any strategy at all, resembles the war efforts of the NATO and the US in Afghanistan.