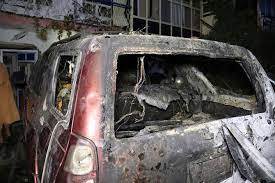 ‘It was the last known missile fired by the United States in its 20-year war in Afghanistan, and the military called it a “righteous strike” — a drone attack after hours of surveillance on Aug. 29 against a vehicle that American officials thought contained an ISIS bomb and posed an imminent threat to troops at Kabul’s airport.
But a New York Times investigation of video evidence, along with interviews with more than a dozen of the driver’s co-workers and family members in Kabul, raises doubts about the U.S. version of events, including whether explosives were present in the vehicle, whether the driver had a connection to ISIS, and whether there was a second explosion after the missile struck the car.’

‘Mr. Ahmadi, 43, had worked since 2006 as an electrical engineer for Nutrition and Education International, a California-based aid group. The morning of the strike, Mr. Ahmadi’s boss called from the office at around 8:45 a.m., and asked him to pick up his laptop.
“I asked him if he was still at home, and he said yes,” the country director said in an interview at N.E.I.’s office in Kabul. Like the rest of Mr. Ahmadi’s colleagues, he spoke on condition of anonymity because of his association with an American company in Afghanistan.
According to his relatives, that morning Mr. Ahmadi left for work around 9 a.m. in a white 1996 Corolla that belonged to N.E.I., departing from his house, where he lived with his three brothers and their families, a few kilometers west of the airport.
U.S. officials told The Times that it was around this time that their target, a white sedan, first came under surveillance, after it was spotted leaving a compound identified as an alleged ISIS safe house about five kilometers northwest of the airport.’

‘Although U.S. officials said that at that point they still knew little about Mr. Ahmadi’s identity, they had become convinced that the white sedan he was driving posed an imminent threat to troops at the airport.
When Mr. Ahmadi pulled into the courtyard of his home — which officials said was different than the alleged ISIS safe house — the tactical commander made the decision to strike his vehicle, launching a Hellfire missile at around 4:50 p.m.
Although the target was now inside a densely populated residential area, the drone operator quickly scanned and saw only a single adult male greeting the vehicle, and therefore assessed with “reasonable certainty” that no women, children or noncombatants would be killed, U.S. officials said.’

‘“It seriously questions the credibility of the intelligence or technology utilized to determine this was a legitimate target,” said Chris Cobb-Smith, a British Army veteran and security consultant.
While the U.S. military has so far acknowledged only three civilian casualties, Mr. Ahmadi’s relatives said that 10 members of their family, including seven children, were killed in the strike: Mr. Ahmadi and three of his children, Zamir, 20, Faisal, 16, and Farzad, 10; Mr. Ahmadi’s cousin Naser, 30; three of Romal’s children, Arwin, 7, Benyamin, 6, and Hayat, 2; and two 3-year-old girls, Malika and Somaya.
Neighbors and an Afghan health official confirmed that bodies of children were removed from the site. They said the blast had shredded most of the victims; fragments of human remains were seen inside and around the compound the next day by a reporter, including blood and flesh splattered on interior walls and ceilings. Mr. Ahmadi’s relatives provided photographs of several badly burned bodies belonging to children.
Family members questioned why Mr. Ahmadi would have a motivation to attack Americans when he had already applied for refugee resettlement in the United States. His adult cousin Naser, a former U.S. military contractor, had also applied for resettlement. He had planned to marry his fiancée, Samia, last Friday so that she could be included in his immigration case.
“All of them were innocent,” said Emal, Mr. Ahmadi’s brother. “You say he was ISIS, but he worked for the Americans.”’

An unfortunate war (all wars are unfortunate but some more than others) ‘ended’ with a fatal mistake.
The advantage of killings by drone is that you don’t need boots on the ground, but if ‘we’ keep making fatal mistakes the drone strikes (Obama relied on them and probably Biden will do the same) will have only negative effects, and that is a euphemism.

Fifteen years ago or so, it was all about winning hearts and minds but the US and Europe have been very good at spreading bitterness in places like Afghanistan and Iraq. Maybe betting on the fact that bitterness or no bitterness Afghans or Iraqis still would like to come and live in the US or Europe, and thus work for and with them.

I would never underestimate bitterness and the anger. The extrajudicial killings, the preemptive strikes, whatever you want to call it, can easily lead to a circle of endless revenge and more revenge.