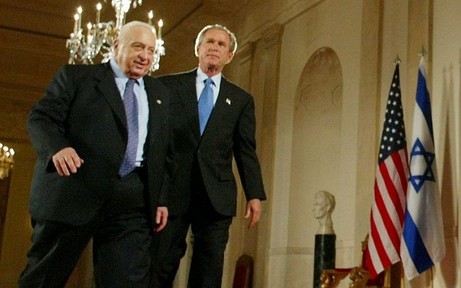 On methods – Amos Harel in Haaretz:

‘The Bush administration openly supported most of the tough measures introduced by Sharon: the assassination of terrorist operatives, military invasions of Palestinian cities and, finally, the reoccupation of the West Bank in Operation Defensive Shield in April 2002. The more the Americans became entangled in their endless war on terror, which dragged them into bloodsoaked invasions of Afghanistan and Iraq, the more Israeli methods and approaches they adopted.
The George W. Bush administration, and to an even greater degree the administration of President Barack Obama even more so, killed terrorists throughout the world with attack drones, using methods that according to U.S. media reports were developed by Israel. The drastic security measures that were introduced in international as well as domestic U.S. aviation copied standards established in Israel decades earlier.’

‘In hindsight, Sharon got what he wanted. With the exception of the Democratic Party’s left wing, successive U.S. administrations demonstrated understanding for Israel’s difficulties and for most of the measures it adopted. Western Europe was less sympathetic, but military officers and intelligence agencies in these countries nevertheless were careful to stay on top of the methods and equipment that Israel developed.’

In other words, Israel and its counterterrorism methods were just testing ground for the larger worldwide and endless war against terrorism.

Also a nice side note on European morality: we don’t like your methods, but we are going to implement them anyhow.