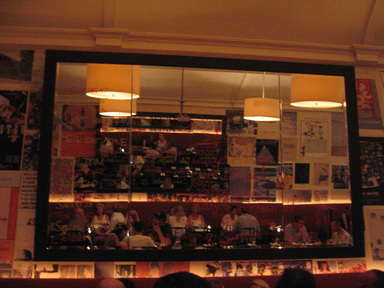 It was mainly coincidence that I went to a reading last night by Keith Gessen.
His name did ring a bell but I don’t think I have ever read one of his essays. He read well, he was often funny and I could concentrate on what he was reading, which is a good sign because during readings I tend to doze off.
What surprised me was that Keith Gessen put some emphasis on internet-porn during his reading and Q&A. Maybe I missed the irony but I thought that internet-porn was an old story that stopped being titillating somewhere in 2000. (Maybe not the images itself but at least the imminent availability of these images, and the grotesque names for the sites, as in Gessen’s novel: the Buck Fuck Bus, all that became as exciting as the Plaboy.)
I still have a book here called “Pornified” about the influence of porn on our daily lives. I never finished the book and from time to time I hide it. I don’t want the cleaning lady to get wrong ideas about me.
After Keith Gessen’s reading a friend of mine and I went to Blaue Gans where I drank too many Himbeergeist.
At 7 am I woke up this morning, but at 9 am I went back to bed again. The whiskey-hangover is the worst, but the Himbeergeist-hangover deserves a second place.