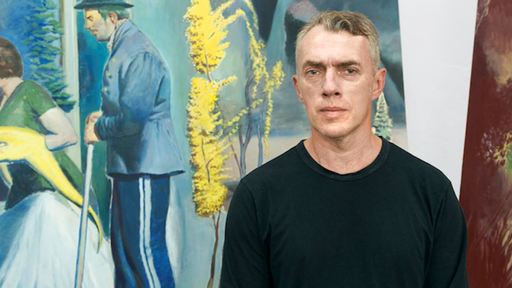 A few Rauch quotes from Thomas Meaney’s profile in The New Yorker:

“I dislike activist types,” Rauch said. He speaks quietly, in a slightly formal register that all the while ironizes itself. I asked him about a group of three men in a smaller painting, one of whom, his hair in a topknot, was whipping his own back like a medieval flagellant. “They are punishing themselves for having white skin,” Rauch told me, and added, “I detest hair buns on men.”

‘A 1998 painting, “Stoff,” showed women in a Cold War-era factory apparently mass-producing abstract art. “It’s less obvious when you paint a bad abstract painting,” Rauch told me. “Whereas with a bad figurative painting everyone knows right away.”’

‘Over ox cheeks in rich red-wine sauce, potatoes, and beer, I asked Rauch if he wasn’t exaggerating the confrontation between abstraction and figuration in the nineties. Weren’t Richter and Kiefer and Bacon all figurative? “But it wasn’t the painters who were in control,” Rauch shot back. “It was the age of the curator.” He entered into one of his periodic rhapsodies about the glories of British painting: “Freud, Auerbach, Bacon—we looked up to them because they were also working on an island, in their case an actual island, but they were cut off as well, much like us in East Germany.” We were served another round of ox cheeks. “I’m afraid I need to capitulate before the potatoes,” Rauch said to the owner. “The ox cheeks are my vegetables.”’

Whatever you think of his work his quotes are refreshing, the ox cheeks quote is delicious.

And depictions of self-flagellation outsideof the religious context are probably comforting.

Hair buns are rather innocent, but we all have our irrational dislikes.