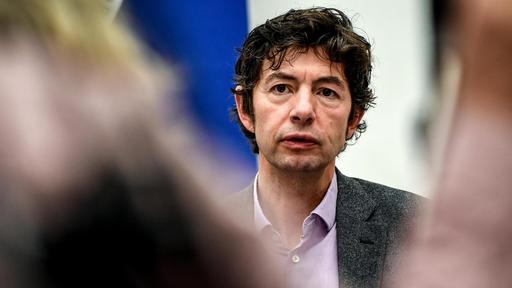 ‘Meanwhile, a large population of the feebleminded have continued to ignore the dangers presented by the virus and refuse to be vaccinated. Indeed, the untenable situation in Germany’s intensive care units is primarily due to this group. In its most recent weekly report, the RKI notes that 87 percent of adults under 60 receiving intensive care due to COVID-19 have not been vaccinated.’

‘The consequences are serious. Whereas more than half the population of Israel has received a third dose of vaccine, the rate in Germany is just 4 percent. Despite the fact that it has been known for some time that protection from the initial doses begins to wane after a few months.
Back in summer, immunologists and virologists made it clear to the German government that all elderly people in the country and those with compromised immune systems needed to receive a booster, which can increase protection from the virus by up to 20 times. The Health Ministry, under the leadership of Jens Spahn, calculated that up to 11 million people could be reached by the end of October. It is now November, and just over 3 million have received their booster shots. Just how outgoing Chancellery Chief of Staff Helge Braun intends to achieve his self-proclaimed target of 20 million boosters by the end of the year remains his secret. Preparations for the campaign have suffered for weeks from chaotic agreements and contradictory statements.’

‘The biggest failure of Germany’s political leaders, though, is their approach to the almost 15 million people in the country who are either opposed to vaccinations or at least skeptical of them. Germany’s vaccination rate is far lower than it is in Spain, Portugal and Denmark, to name just a few examples. Apparently, nobody understood that it would require an immense effort to reach the doubters, no matter how crude the methods.
Nobody disputes the fact that it is difficult to sway the recalcitrant. Their motives are simply too varied. But there are patterns.’

‘Anti-vaxxer tendencies have a long history in Germany. When Emperor Wilhelm I introduced a vaccine requirement in 1874 against smallpox, an organized resistance to the decree quickly popped up and even published its own newspaper called "Der Impfgegner,” – The Anti-Vaxxer. It printed caricatures depicting the vaccinated with cow ears, since the vaccine was made using the cowpox virus. Today, people say that Bill Gates has planted microchips in the vaccine to control humanity. But that degree of whack-jobbery applies to only a relatively small group.
Psychologist Cornelia Betsch leads the Cosmo survey at the University of Erfurt, which explores the reasons people are opposed to vaccination. She believes that people like the doctors in Lüchow make up 2 to 5 percent of the population at most – and says that they are essentially unreachable.
Many others, by contrast, say they are essentially open to vaccinations, but are just wary of the coronavirus vaccine. They tend to be concerned about the relatively new mRNA vaccine technology used by BioNTech and Moderna. And there is a fair amount of inaccurate information out there about these vaccines, such as the claim that they can make women infertile.’

‘They and the anthroposophists are joined by many people who are members of or tend to support the right-wing radical Alternative for Germany (AfD) party. According to a survey by the pollster Forsa, 50 percent of unvaccinated voters in Germany cast their ballots for the AfD in September’s federal election, with another 15 percent voting for Die Basis, a party that serves as the political arm of the "Querdenker" movement, which has protested the measures taken by the government to contain the coronavirus’ spread.

In the Cosmo study, 18 percent of respondents said that refusing to get vaccinated was a way of expressing their political dissatisfaction. "There’s a fairly stable milieu that works itself up against the state and its institutions at every available opportunity, reinforced by the echo chambers in the social networks," says Raj Kollmorgen, a professor of sociology at the University of Applied Sciences Zittau/Görlitz.
This phenomenon is particularly apparent in rural areas that were once part of East Germany, he says, where the population tends to be older. Younger people, who are usually better informed, he adds, moved to the cities. "There’s a lot of pressure to conform," Kollmorgen says, adding that those open to vaccination would quickly encounter that pressure in the form of stigmatization.
That might seem to apply to Muslims, too, who are often accused of refusing to get vaccinated for religious reasons. But that claim isn’t backed by studies or polls.
The problem has more to do with difficult access to the healthcare systems, says Shao Xi Lu of the Berlin Health Collective, an organization that seeks to bring quality healthcare to underserved communities. "For example, the invitations to get vaccinated were written and sent in official German language," she says. "When people don’t have a good understanding of German, they can also have more difficulty getting an appointment to get vaccinated."’

‘This week, the SPD, the Greens and the FDP presented legislation that virologists and doctors criticized for lacking practical relevance and being half-hearted. There are to be no curfews, contact restrictions or blanket school closures. Nor will there be blanket 2G rules for areas of public life. And there is no mention anywhere of compulsory vaccination for healthcare workers and care home staff.
It seems as if the FDP has had a strong role in shaping the next government’s coronavirus policy, a party that had long been suspected of not taking the virus seriously enough.
In parliament this week, conservative CDU politician Jan-Marco Luczak accused the Greens and the SPD of being "obviously afraid of the FDP." Luczak said the parties in the next government don’t have sufficient fortitude to take responsibility. He then turned to face Lauterbach. "You’re the SPD’s public face in fighting the coronavirus, but you obviously have zero clout in your own party group," he said.
In fact, Lauterbach has long been fighting for 2G rules nationally. But because the FDP strictly rejects the rules and appears to have a soft spot for the unvaccinated, it successfully vetoed those calls. Commenting recently on the plans of his party’s prospective government coalition partners, Marco Buschmann, a senior official in the FDP’s parliamentary group, said that "unconstitutional curfews would henceforth no longer be possible."’ (…)

‘To avert that scenario, the German states would also have to better coordinate with each other. As in the worst of times during the pandemic, there is currently a dizzying array of rules in different states. Bavaria has already implemented the 2G requirement. Hesse is considering expanding 2G rules to other areas of public life. Mecklenburg-Western Pomerania implements stricter rules based on local infection numbers. Meanwhile, Baden-Württemberg and Brandenburg are strengthening measures against unvaccinated people. Even those responsible for these rules are sometimes having difficulty keeping track of everything.’

‘Drosten has three clear recommendations: Shutdowns, booster shots and closing the gaps in immunization. "From a scientific point of view, contact restrictions are urgently needed in order to push down the incidence, which is really alarmingly high," he says.
"Every effort must now be made to close the million-fold vaccination gap in the adult population," says Drosten. After all, new virus variants could emerge at some point "against which we would have to vaccinate completely anew – especially if we aren’t yet in the endemic phase."
And because it's a lengthy process, the virologist says, it depends on everyone, just as it did last winter. "Everyone should consider whether you can’t consciously limit your own contacts again for a few weeks," warns Drosten. "The public’s own voluntary initiative helped get us out of trouble during the previous waves. I hope this will succeed again."’

If you think your government’s policy is a mess, read this article. It helps to put things in perspective.

Also, Drosten is a voice of reason. He is very clear about the seriousness of the situation, but he is not pushing, at least not in this article, for 2G.

In order to fight this pandemic seriously you have to take civilian liberties seriously. Not all of them can be guaranteed all the time, but it’s awkward that a magazine like Der Spiegel is pushing Germany to become more like let’s say China.

The more control the better.

And then later of course complaining about the police state. Perhaps Der Spiegel likes to be contrarian.