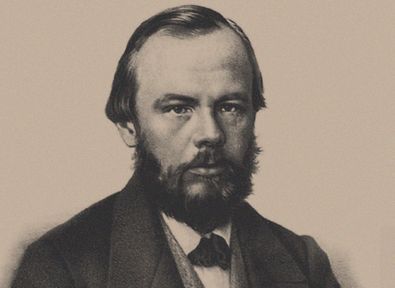 ‘Dostoevsky was an agonizing rewriter, so the experience of dictating a book – his novella The Gambler – was a new one. He had hired her because he needed the promised cash, and needed it fast. In terms of sheer volume, perhaps, the second Mrs Dostoevsky (as she soon became) could not quite match the Countess Tolstoy, who copied out War and Peace seven times before her husband was satisfied with the result. But unlike the Tolstoys’ marriage, which was a battlefield as bloody as Borodino, the Dostoevskys’ marriage, for all its painful episodes, was one of profound devotion.’

‘Andrew D. Kaufman’s biography The Gambler Wife is not only a much-needed act of justice; it is also profoundly entertaining, sometimes funny, and sometimes intolerably sad. When the Dostoevskys lost their baby Sonya, named after the heroine of Crime and Punishment, their detestable Swiss neighbours sent their maid round to ask them not to weep so loudly. We, the readers, send them no such complaints, but we cannot forget the tears, nor – a memory from the two surviving children – do we forget the noise they so often heard coming through the walls: their mother’s voice raised in fervent prayer.

One of the most poignant objects I ever saw was the large cigarette box in the Dostoevskys’ flat, now a wonderful museum, in St Petersburg. On the side of it, his eleven-year-old daughter Lyubov had written, “Papa died at a quarter to nine”. It was January 28, 1881: a gruesome emphysema death worthy of The Brothers Karamazov, which Dostoevsky had luckily just completed. His beard was soaked with the blood he had haemorrhaged, but he managed to ask Anna to bring him the copy of the New Testament given to him by the widow of a former Decembrist in Siberia when he was taken there, shackled, in 1849. They opened St Matthew’s Gospel and read the words of Jesus to John the Baptist: “Do not hold me back, for thus it is fitting for us to fulfil a great truth”. “Do you hear? ‘Do not hold me back.’ That means I’m going to die”, Dostoevsky said. He added, with just about enough truth to make it worth gasping out between coughs, “I always loved you passionately and was never unfaithful to you even in my thoughts”.’

‘It is possible, of course, that Dostoevsky was both the monster Strakhov depicted, and the great writer whom his wife made into great business. Yet when Anna arrived to take down The Gambler from his dictation, she was the highly educated daughter of a prosperous civil servant, and she had read all of Dostoevsky’s work. She had no intention of becoming his, or any man’s, puppet. Although she fell in love with Dostoevsky and abandoned her intention of living as an independent woman, she did not become a slave; she became a friend, a lover, an agent, a publisher, a manager.
Apart from standing by her man in pretty tough circumstances, it was she who realized the way out of his financial difficulties. The extraordinary Katkov paid Dostoevsky for serial publication, but it was another publisher, Fyodor Stellovsky, who hung onto the rights to publish him in book form, and who held the novelist over a barrel by refusing to pay him until he had worked off an advance. Anna managed to extract her husband from the unwise contracts he had made with this shark and to help him self-publish. She was so successful, particularly in her understanding of distribution among booksellers, both in the big cities and in the provinces, that she was able to help the Countess Tolstoy in her decision to do the same, when her husband gave up all his rights in the publication of his books: an act of Christian renunciation which had the doubly satisfactory outcome of making him feel holy, while causing his wife excruciating financial worry.’

‘“Communism will conquer one day, irrespective of whether the Communists are right or wrong”, he wrote four decades before it happened, in a note on his novel The Adolescent. “But this triumph will stand very far from the Kingdom of Heaven. All the same, we must accept that this triumph will come one day, even though none of those who at present steer the world’s fate have any idea about it at all.”’

‘Dostoevsky himself enjoyed the advantages of being born into a bookish middle-class home and through early success as a writer, frequenting the salons of the rich and the intellectual. Yet he was also aware of what it was like to possess literally nothing, to have been reprieved at the last moment from death by firing squad, to have been exiled to Siberia – the “House of the Dead” – and, on his return from exile, to wrestle with a miserable marriage and early widowhood, to be hopelessly prone to unsuitable feelings of love, plagued by the worsening of his epileptic condition, and unable temperamentally to settle or to be still. Hence a life of wandering for some years through the spa towns and gambling casinos of German-speaking Europe, the constant smoking, and the writing of anguished, furious letters to editors and publishers who failed to bail him out from yet another financial disaster.’

‘Dostoevsky upended the Enlightenment by reminding us how profoundly human beings are guided by Unreason. Turning from Tolstoy’s novels and religious writings to our world in all its moral chaos creates a feeling of disconnect. Reading Dostoevsky, by contrast, is good preparation for life in our irrational world. No reader of The Idiot or Devils would be surprised that Vladimir Putin and Donald Trump are regarded by millions of human beings as heroic saviours. Nor could the pathetic unravelling of liberal Western Christianity, and its attempt to marry Reason and the Gospel, come as any surprise in Russia.’

‘The era of Rasputin, unfolding horrifically into that of Lenin and Stalin, demonstrated that Holy Mother Russia had indeed fallen into the hands of Devils.’

We are guided by unreason, especially when we think it’s reason that’s guiding us.

And also, one will read Dostoevsky slightly differently when you know that the Swiss neighbors were complaining about the weeping.

I still want to spend my last years in Switzerland, I will weep as silently as possible.