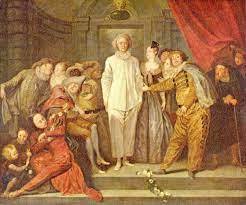 On gender -Ofer Aderet in Haaretz:

‘It happened in November 1721, 300 years ago this month, in the city of Halberstadt in Prussia (today in Germany). These days, Catharina Margaretha Linck would likely be termed a transgender man, but in the 18th century, she was condemned for performing an “act of sodomy” which she was induced to do by Satan – no less. Disguising herself as a man, she married a woman and had sexual relations with her. For that she was condemned to death.’

‘Little is known about Linck’s life. In fact, the sole source of information about her are court documents drawn up three centuries ago, summing up the incriminating evidence against her. She was born in 1687 in the city of Halle, the illegitimate child of a widow who was impregnated by a soldier. She grew up in an orphanage, which she left in her youth to embark on a series of adventures that would end with her death.
After setting out on her new path, she assumed the identity of a young man, subsequently changing her names, livelihoods and religious affiliation (between Catholic and Lutheran). At one point she joined a nomadic group, which was described in the court documents as a cult whose members were fortune tellers. She fled from them after persuading two men they could walk on water – both of whom drowned. Afterward she held various jobs, including as a swineherd and a textile worker, until adopting a military career in 1705.’

‘Around this time she started to have sexual relations with women, using a device that the documents describe as a “device made of stuffed leather,” to which were attached small sacks made of pigskin, meant to simulate testicles, with the whole apparatus tied to her body with straps. Tiring of army life, she went AWOL, was caught and sentenced to death. In her defense she asserted that she was a woman. Her punishment was reduced and after a few weeks in prison she was released.’

‘In the trial, she was accused of having sexual relations with various young women, widows and prostitutes, while disguised as a man. In Linck’s defense, there were arguments to the effect that the Bible does not expressly forbid sexual relations between women. It was also argued that because the device was artificial, what she had done did not fit the definition of an “act of sodomy.” Physicians who examined her body found that she was a “woman” in every respect and not a hermaphrodite.

The judges pondered the charges and the appropriate punishment. Finally, they condemned Linck to death; she was beheaded and her body was cremated. The punishment was authorized by King William Fredrick I himself. It emerges that Linck was the last woman to be executed in Europe for performing lesbian sexual acts; men were subsequently executed, however, for having sexual relations with men.’

‘The pirate-woman Mary Read, a contemporary of Catherina Linck, was born into a poor English family at the end of the 17th century. Her mother forced her to disguise herself as a man in order to continue to receive money from her grandmother, who had supported her brother financially and didn’t know he had died. Read assumed a new identity as Mark Read, enlisted in the British Navy, fell in love (as a woman) with a Dutch sailor, switched to the side of the Dutch and sailed to far-off destinations.
On one of her journeys the ship was attacked by pirates. Most of the crew were killed, but Read survived and joined the ranks of her captors, as was the custom at the time. Even after her secret was revealed, the pirates did not change their attitude toward her. In 1720, while anchored in Jamaica, the pirates were stopped by a British patrol boat and taken captive after a short battle. Read was spared punishment because she claimed she was pregnant. The others were hanged. Read died shortly afterward in prison.’

How interesting that both men (women) joined the armed forces of their countries.

Well, we know from Stendhal (‘The Red and the Black’) that both the army and the church are a fabulous escape for those seeking a better life, or capital punishment.