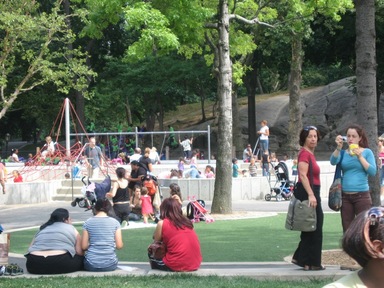 Yesterday I went with my godson and his mother to a playground in Central Park. The weather was unexpectedly nice, we were even able to eat crab cakes, steamed broccoli and sesame crusted tuna, which we had bought at Dean & DeLuca, in the park.
After this lunch we went to the playground.
I was reading a book -- my godson was playing in the sand and his mother was watching him.
A few feet away from me two parents were playing with their two-year-old son. The mother and the son went to the sand, while the father sat down on the bench and started reading the Village Voice.
When I looked up again I noticed that the man was studying the section of the Voice with ads for massage parlors and escorts. He tore out an ad or two and put it in his pocket.
Then the woman and the kid came back from the sand, the man closed his paper and he engaged in a conversation with his family.