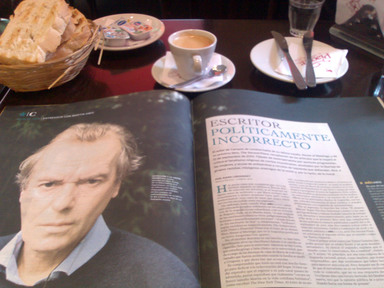 It’s more entertaining to read a negative review than one that is lukewarm or even positive. Except of course if the reader of the review if also the author of the book under review.
I’m not sure why this is exactly; probably it has to do with Schadenfreude but I guess it is also a relief for some that there are books you can skip without a sense of guilt.
I’m aware that most people skip books happily, anti-intellectualism has been cool for a long time.
“The second plane” by Martin Amis was trashed in the daily New York Times. In yesterday’s book review Leon Wieseltier does a good job of convincing the reader that “The second plane” was a mistake.
Wieseltier writes: “Surely we must be able to imagine, not only for the sake of our literature but also for the sake of our security, that there are sexually satisfied enemies of decency and modernity. And enough about those patient virgins in the sky: the threat from suicide bombing, and from the political cultures that prize it, is founded on deformations more worldly and more substantial than a harem fantasy.” Mr. Wieseltier has a point, although I do think that sexual frustration in certain societies is more than an imaginary problem. But while reading this paragraph I wondered how many people actually are sexually satisfied.
Think of a period in your life that you were sexually satisfied. Did this satisfaction make you a more decent person? Or was the satisfaction merely a distraction?