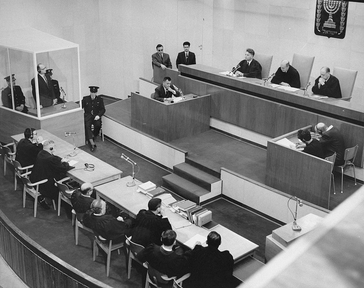 On the round number – Nirit Anderman in Haaretz:

‘Who counted, and how? And what exactly ought to be counted here? Should the tally include all the Jews who died in Europe during the Holocaust? Should Jews who died a natural death be excluded from the count? When exactly did the Holocaust start and when did it end? And is it correct to only count the Jews who were killed during the war itself, or must one also include those killed from the time Hitler came to power? And what about those who died as a consequence of the war, but after it was over? Are they also included in the six million? Several years ago, these questions began to nag David Fisher. Interviewed earlier this month on the balcony of his Tel Aviv home, the 65-year-old filmmaker says it all started with a visit to the Yad Vashem World Holocaust Remembrance Center in Jerusalem a decade ago. When he noticed the institution’s logo, with six branches symbolizing the six million, he suddenly began to wonder about this number. When he asked someone on staff how they got to that number, he was told that it is not a precise figure. “But if we were to find out now that it’s five million – would we have to go and change our symbol? It’s going to stay the same, six million, forever,” the employee told him.’

‘However, nearly all the scholars appearing in the documentary agree that this figure has become so identified with the memory of the Holocaust that it mustn’t be touched. And some do not try to hide their dismay at Fisher’s attempt to question it. “If you’re not careful, this film could become a tool in the hands of Holocaust deniers,” one of them scolds him. The importance of this number long ago exceeded the issue of historical accuracy, the experts tell him.. It long ago became one of the symbols most closely identified with the Holocaust, and it is very important that a symbol like that be preserved; it must be defended.’

‘Fisher understood that the difficulty of determining the number of Jews killed in the war was not a unique case. “It’s not only in the Holocaust. In all the other genocides, there are no exact figures,” he says. “Like Omer Bartov (a professor of history) says in the film, one of the characteristics of genocide is that there are no exact numbers, because the killers did not think of their victims as human beings, they only wanted to kill them all. So in other places, too, where there have been genocides – like Armenia and Darfur – we don’t know an exact number [of victims]. By contrast, if you look, for example, at the casualties in all of Israel’s wars, you can see exactly how many there were. Because there is someone who counts, there is someone who cares, each one of them has a name.”’

‘And that one of the biggest scholars, Raul Hilberg, says 5.1 million. In recent years, Father Patrick Desbois (a French Catholic priest), who took it upon himself to uncover mass killing pits in the former Soviet Union in which Jews were murdered, found that more than a million people were killed that way. That’s a number that should ostensibly be added to the six million – in other words, perhaps one should say there were more than seven million murdered. So I was curious where this number six million came from, and how it became so fixed and so sanctified that people warn you to leave it alone.”’

‘Hearing things like that from someone who’s considered the preeminent Holocaust scholar today – that didn’t discourage you?

“On the contrary. When I’m told don’t touch, I touch. When I’m told it’s not important, I understand that for me it’s the most important. To me, touching on this number is an attempt to touch the establishment. The number six million has become an institution, and I wanted to stick a pin in it to try to understand where this number came from. Bauer says something there that is true in itself: ‘If you find out that it’s five million and not six million, so what? Does that make the Nazis any less bad?’ The uniqueness of the Holocaust is that Nazi Germany decided it wished to eliminate all the Jews. But ultimately, history is written by people who want to be accurate.”’

‘Including before Holocaust deniers who might say the film supports their claim that the number six million is highly exaggerated? “Yes, screening the film to Holocaust deniers and neo-Nazis is my way of dealing with them. In the movie, I ratify the number six million, I don’t question it. Not in the usual sense of numerical accuracy, but in the sense of the magnitude of the crime against humanity that occurred. If I were to go to Holocaust deniers today, I would tell them, for example, that it’s true that in 1945 it was known that four million Jews were murdered in Auschwitz, and 50 years later it was known that ‘only’ a million and a half people were killed there, out of whom one million were Jews. When I heard about this discovery, I asked myself: How is it possible, then, that the six million number was not reduced accordingly? It bothered me. But now that I know the answer is not statistical and that it is not taken into account in the calculation, as is explained in the film – I get it.”’

‘Another person Fisher interviewed was historian Dr. Avraham Milgram, an expert in contemporary Jewry, whom he says is the only one at Yad Vashem who’s studied the issue of numbers intensely over the years. “He told me that by posing my question, I am placing myself between history and memory,” Fisher says. “He explained that if he were to tell the present generation that it’s not six million but a smaller number, that would harm the memory of the Holocaust, and he is not willing to do that. However, in his academic work as a scholar, he will give the accurate number. In other words, for the sake of preserving the memory of the Holocaust, whether justified or not – and I think it’s not – he and other scholars are not prepared, at least right now, to touch the six million number, because there is pressure from the establishment and Holocaust survivors to preserve the symbols that have been set.” In other words, scholars have known for years that six million is not an accurate number, but no one says so, so as not to damage the symbol.
“Yes, and they won’t say so either.” So where did the figure of six million actually come from? Bar-Ilan University’s Prof. Dan Michman notes in Fisher’s documentary that, two months after the war, Vilna Ghetto leader Abba Kovner gave a speech to the Jewish Brigade in Italy in which he said, “Gentlemen, we lost six million of our brethren.” Also mentioned in the film is the fact that, as early as 1944, Eliezer Ungar, a leader of the Hashomer Hadati movement, said at a convention of the Religious Kibbutz Movement that “six million of our brethren have been murdered in the war”; that quote appeared in a newspaper report the next day.’

There are a few things interesting here.

The ambivalence between history and memory, memory needing the symbols, which means a certain degree of mythologizing.

The deniers and the fear what they may do with the longing for accuracy and its consequences. A bit more than 5 million, a bit less than 7.

It might have been Stalin who said, ‘a single death is a tragedy; a million deaths is a statistic.’

Maybe, but history is about accuracy indeed, not about saving memory or trying to prevent the enemy from using your research as ammunition.