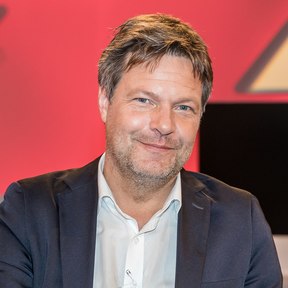 ‘DER SPIEGEL: How serious is the situation? Habeck: It is concerning. I was there in May. The soldiers are already in the trenches and snipers are firing. At any time, an excuse could be found for a military escalation. That is why I am thinking about how we can contribute to de-escalation. We should also be considering new economic sectors that could help both sides find their way out of this confrontation.
DER SPIEGEL: That would be a break with your party’s line, which calls for taking a tough line with Moscow.
Habeck: On the contrary. Russia knows that crossing red lines would immediately trigger painful sanctions that have already been prepared. And it is clear that Russia is heating and stoking this conflict. But it isn’t enough to simply leave it at that. The efforts of Foreign Minister Annalena Baerbock to get diplomatic efforts back on track is absolutely vital. And as economy minister, I am trying to do what I can to contribute.
DER SPIEGEL: During your trip to Ukraine, you caused a bit of a commotion by proposing that Ukraine be supplied with defensive weapons. What is your position on that question today? Habeck: This issue is being discussed by NATO and among NATO member states and is frequently being approached from a position beneficial to Ukraine.
DER SPIEGEL: Will Germany be delivering weapons to Ukraine via NATO? Habeck: As I said, there is a suitable format for these questions within NATO and in this situation, I think it makes sense to stick to that format.’

The vagueness of Habeck is telling. De-escalation first, red lines afterwards. Obama’s Syrian lesson has not been forgotten.

Today Biden declared that the US would provide Europe with gas and oil in case of Putin cutting off fuel shipments to Europa. All this also to help Europe to rally behind NATO (i.e. the US) in the hope that for example Germany won’t appease Putin out of fear that the own population might soon not be warm and not so peaceful anymore.