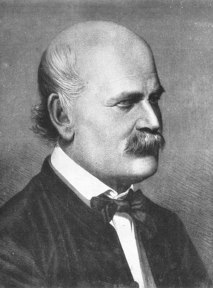 On the believers – Rivka Galchen in LRB:

“In the late 1840s, the Hungarian obstetrician Ignaz Semmelweis oversaw two free maternity clinics in Vienna. The clinics accepted patients on alternate days. At the first clinic the mortality rate was 10 per cent; at the second, it was 4 per cent. The clinic with the low mortality rate trained midwives. The clinic with the high mortality rate trained medical students. Fear of the medical trainees’ clinic was so great that some women chose to give birth in the street – that way they could say they had been on their way to the clinic, and still receive free medical care for their baby. Even the women giving birth in the street had lower mortality rates than those giving birth at the clinic staffed by medical students. Semmelweis set out to discover the reason for this. He concluded that the medical trainees needed to wash their hands, like the midwives did. For this, he was dismissed as a madman.
Or rather, most doctors dismissed him as a madman. At his own clinic, the students adopted the new handwashing regime. Maternal fatality rates dropped dramatically. Semmelweis presented this evidence to the world. Again, his findings were rejected. When his term as clinic director ended, he wasn’t re-hired. He returned to his native Budapest, where he had to ask around even for poorly paid work (he eventually became professor of obstetrics at the University of Pest). He wrote a book on his research, hoping that, with all the data and arguments assembled, others would see what he saw. The book received poor reviews. He was portrayed as a man in the grip of an obsession, a man who wouldn’t stop talking about dying women.
He started drinking heavily. Even his wife began to complain about his obsession. He was often seen with a prostitute. He may have developed neurosyphilis, but this remains unclear. The maddening effects of professional and social rejection can’t have helped his mental state. In the summer of 1865, he was committed to an asylum, where he was beaten by the guards. He died shortly afterwards from infected wounds. Those infections could probably have been prevented if the guards had washed their hands. Mortality rates at the maternity clinics rose again after the handwashing regime was abandoned. Only some years later, in Germany, did it become common practice for doctors to wash their hands (they used chlorine).”

“Right-wing politicians have proved skilled at piggybacking on the populist power of anti-vax sentiments. In Italy, the far-right Five Star Movement used a vaccine mandate introduced by the centre-left coalition in 2016 to increase its own visibility, repeating false claims about proven vaccines. After the 2018 election, which brought the M5S to power, its health minister, Giulia Grillo, fired all thirty members of the government’s scientific advisory board: it was, she said, time to ‘give space to the new’. The current national unity government has reversed this position, introducing one of the toughest vaccine passport regimes in response to Covid: a ‘super green’ pass, signalling double vaccination, is required in most public places. People aged over fifty have to be fully vaccinated in order to work, as do most government employees.”

“Berman is keen to dispel the notion that those who refuse vaccines suffer from an information deficit problem. Anti-vaxxers collect evidence in order to disrupt or conceal the truth, not to uncover it. For those who are sceptical of vaccination without necessarily being anti-vaxxers, the most effective public health strategy remains unclear. Berman argues that ‘reactive’ responses, such as mockery, are counterproductive. He cites a series of studies that demonstrate what we might feel instinctively: showing people information that contradicts their beliefs rarely makes them change their minds, and often hardens their convictions. Factsheets like those used by the Centres for Disease Control and Prevention tend not to work, both because they are less powerful than personal narratives and because the other side produces misleading literature in the same format. Online bots and trolls are a source of both pro and anti-vax messages, in more or less equal amounts: the amount of contradictory and unstable information is as much, if not more, of a problem as the information itself.”

Mockery is counterproductive. So it is too.

More important, it appears to be hard and sometimes impossible to change other people’s minds.

But there are pragmatists, and you can always seduce a pragmatist.