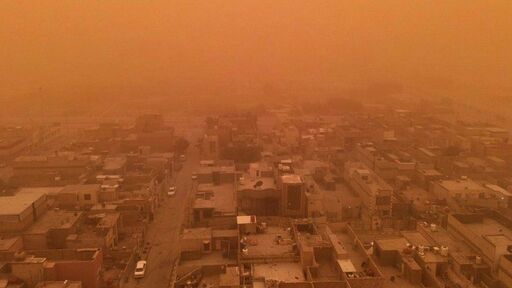 On the sandstorm – David Rosenberg in Haaretz:

‘At first glance, it looks like a U.S. city in the midst of a winter storm: Cars trundling slowly down a street, their headlights aglow at midday, as they try to navigate a veil of snow.
Except in this case, the location was Baghdad amid sweltering temperatures above 30 degrees Celsius (86 degrees Fahrenheit). The streets last week weren’t shrouded in white but by a dull orange – the color of the sand and dust filling the air. Similar scenes played out in Iran, eastern Syria and much of the Gulf.’

‘They aren’t just an inconvenience: Sandstorms impose heavy health and economic costs too. In Iraq, about 1,000 people ended up hospitalized with respiratory problems, and the Health Ministry has stockpiled supplies of oxygen canisters. The government declared an impromptu holiday to encourage people to stay home, and many airports were shuttered.’

‘Nevertheless, Oxford University geographer Nick Middleton, who last year co-authored one of the first papers on the subject, says the costs are quite extensive.
“I think it’s fair to say that individual dust storm events can impact tens of millions of people, and the economic impact is in the hundreds of millions of dollars,” he says.
The correlation between health issues and sandstorms isn’t always clear, but it’s almost certainly “huge,” he adds, noting that “there are strong associations between dusty days and respiratory problems, some heart ailments, conjunctivitis, silicosis.”’

‘In 2013, for instance, Iraq suffered an estimated 10,400 premature deaths due to dust in the air. This cost the economy close to $15 billion, or 2.9 percent of gross domestic product.
There are direct costs as well, from shuttered airports, lost crops and production halted to government-ordered holidays. The World Bank estimated those at $13 billion, bringing the Middle East and North Africa’s total costs from dust storms to more than $150 billion annually.’

‘A taste of that future is illustrated by Middleton’s paper, “Synoptic Causes and Socio-Economic Consequences of a Severe Dust Storm in the Middle East,” which documented the fallout from a particularly big sandstorm in early April 2015 that struck 10 million square kilometers (3.8 million square miles) – including Iraq, Iran and the Gulf, extending as far east as India and as far west as the Red Sea.
The storm forced officials to close schools in Qatar and parts of Saudi Arabia, where the kingdom also called an impromptu holiday for workers. Ports in Saudi Arabia and Iran suspended operations, and airports in seven of the countries had to delay, reroute or cancel flights. Outdoor construction work was halted in the United Arab Emirates, and Abu Dhabi canceled its Desert Challenge Rally because visibility had fallen to near zero. Even solar power plants stopped functioning because so much dust had collected on panels.’

‘Like other instances of growing extreme weather events, it’s tempting to lay the blame on climate change. But experts say climate change is only one factor – albeit one that will almost certainly weigh in more heavily in the years ahead as it causes increased desertification and more severe drought.
The source of dust storms and sandstorms is overwhelmingly due to natural causes rather than man-made ones, but the those have been exacerbated by human activity.
In the Middle East, poor land management leaves soil unprotected after the harvests and wars have caused farmers to abandon their fields, all of which has created huge swaths of land where wind easily picks up dust and carries it aloft. Population growth and urban sprawl reduce areas that once contained vegetation that held down soil.
Big bodies of water, like the Aral Sea lying between Kazakhstan in the north and Uzbekistan in the south, and Lake Urmia in Iran – once the largest lake in the Middle East – have dried up, leaving dust to be swept into the air. Multiple damming projects have dried up riverbeds and reduced the flow of water into the Tigris and Euphrates rivers. Even Saddam Hussein played a role by draining the southern Iraqi marshlands in the 1990s as a way of fighting local rebels.’

‘In any event, the region’s governments have taken some action. Saudi Arabia’s Prince Mohammed bin Salman has committed to planting 10 billion trees in his country and another 40 billion in the region to fight sandstorms and desertification. In 2016, the UAE’s Masdar Institute launched a dust forecasting system that countries in the region can use to prepare for major storms.
Middleton acknowledges that even if governments cooperate, it won’t be easy to combat sandstorms. But, he says, within the confines available to them, they can at least mitigate the impact and address local factors that make the sandstorm worse. “It’s easy to throw up your hands and say it’s a natural phenomenon … but that’s not to say you can’t do something about the impact,” he says.
“There are certain sectors of society who are more vulnerable – the elderly, children, people with asthma. You can do a lot if you can warn people: close your windows, don’t go to your job or school – they are simple, but they can be effective,” Middleton adds. “And, where human activity is responsible, you can try to get farmers to farm more sustainably and use more ground cover.”’

Natural causes, exacerbated by human activity.
40 billion dollars to fight sandstorms in the region is a sign that Saudi-Arabia is taking this phenomenon seriously. The illiberal kingdom, as illiberal as Putin just slightly more discrete, sees in the sandstorms a threat to its own survival.

If the sandstorms will continue they might destabilize the world, maybe even more so than the war in Ukraine is destabilizing the world now. (Question: can we expect a stable world?)
Also: it’s human and maybe even healthy to not believe in your own downfall.