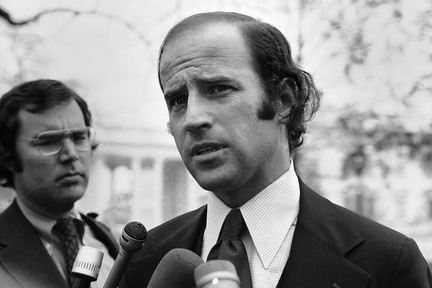 On a world-class griever - Susan B. Glasser in The New Yorker:

‘There is little doubt that Joe Biden is a world-class griever. For the part of the Presidency that requires national mourning, Biden’s tragic past as a husband and father has given him a lifetime of experience. Think of him on Tuesday night, just off the plane after a long trip across the Pacific from Tokyo, speaking with barely suppressed rage and horror as he responded to a school shooting in Uvalde, Texas, in which nineteen elementary-school children and two teachers were killed. Is there anyone in American public life today who can speak more movingly and more directly than the long-suffering President about the torment that’s endured by a grieving parent? “To lose a child is like having a piece of your soul ripped away,” he said. “There’s a hollowness in your chest, and you feel like you’re being sucked into it and never going to be able to get out. It’s suffocating.” If authenticity is the current measure of a politician, he has that quality, too, in abundance. Who could question that Biden meant it when he channelled his anger at Republicans for blocking, again and again, meaningful national efforts at gun control, at the excuses he—and we—have heard over and over for why nothing can make a difference, as the body count rises once more? “It’s just sick,” he said. “Where in God’s name is our backbone?”

In some ways, the most tragic part of his speech, however, was its unsatisfying bottom line. Biden, rightly, called for action. He demanded it. “We have to act. And don’t tell me we can’t have an impact on this carnage,” he said. “We can do so much more. We have to do more.” But neither Biden nor anyone else in Washington held out much hope that any action will result from this latest tragedy, which was, after all, one of twenty-seven school shootings to have already taken place in the United States this year, and which came barely a week after a horrific shooting that killed ten Black shoppers at a supermarket in Buffalo. For decades, vast majorities of the American public have supported an array of gun-control measures that have been successfully blocked by Republicans in Congress. This week’s events suggest that will be the result in the wake of this tragedy, too. Biden’s grief and outrage were real—and also just another awful part of business as usual for the American Presidency.’

‘No wonder, then, that the days following Biden’s moving remarks about Uvalde have been accompanied by a sense of weary, knowing fatalism. There is little chance that Washington will succumb to what one cynic, writing in the conservative Web publication The Federalist, called the evils of “do-somethingism.” Do-nothingism remains the far likelier scenario. By Wednesday, Senate Majority Leader Chuck Schumer had already pulled back from his initial plan to at least embarrass Republicans with a symbolic gun-control vote or two. Instead, he said that he was giving his Democratic Senate colleague Chris Murphy, of Connecticut, “a short amount of time” to negotiate with Republicans to see if any breakthrough is possible. Hope rarely dies in the Senate, where the Democrat Joe Manchin, a longtime participant in such talks, insisted that this time feels different, saying, “I’ve never been in this frame of mind.” Instead of sticking around to deal with the crisis, though, the senators headed off on Thursday for a ten-day Memorial Day recess. Odds, anyone, on the chances that ten Republican senators will suddenly find consensus in between holiday beach barbecues and campaign fund-raisers? Biden, for his part, spoke of his outrage again on Wednesday—and failed even to ask legislators to take any specific action, beyond a plea that they approve his nominee to head the Bureau of Alcohol, Tobacco, Firearms, and Explosives. On Sunday, Biden will fly to Uvalde to mourn in person, and undoubtedly another sad, eloquent call to action will be made. It is, after all, “fucking nuts to do nothing,” as Senator Mark Kelly, of Arizona, put it the other day. Yet nothing has to remain the default expectation in Washington.
None of this, of course, is Biden’s fault. It’s hard to imagine anyone blaming him for a record of inaction that goes back decades. The political risks to Biden, however, are that he is reduced to being just another agonized bystander, another protest voice, no more than a commentator on his own relative powerlessness. And it comes at a terrible moment for his Presidency and his party: when his leadership, or lack thereof, has become an all-out political crisis. For all those Democrats who blame Republicans for this, and for everything, I’d argue: sure, but what Biden is doing isn’t working for a large group of Democrats and Independents, either. His approval ratings have plummeted since last August not because Republicans have soured on Biden. They already disdained him.
The bottom line is that, by any conventional metric, Biden has failed to convince a solid and durable majority of Americans of his leadership. Both Reuters (this week) and the Associated Press (last week) have him hitting his lowest point yet in Presidential approval, hovering under forty per cent. Other metrics for the state of the American psyche have taken similar hits. Consumer confidence has gone down significantly since Biden became President. The current percentage of Americans who believe the country is on the wrong track has gone up to around seventy per cent, as the Tufts political scientist Daniel Drezner pointed out this week. With high inflation and fears of a recession, all the lights are blinking red. Drezner rightly called this “America’s pessimism surplus,” and it is, for the moment, that rarity: a bipartisan sentiment.
In this context, another mass shooting or two or three is not a game changer. Biden is just another Democratic President stymied by the fact that there are two parties in this country, and one of them—not his—obstructs the passage of popular gun-control measures. Before Buffalo and Uvalde, gun control was not a top issue among voters of either party in the run-up to the midterms. The electorate is as fatalistic as their despairing President about the prospects for meaningful preventative action. It has given up. The voters are not wrong. Biden’s call for action at such a moment is also a reminder that he himself cannot produce it.’

Do-nothingism and do-somethingism produce more or less the same results, on this topic at least. And on quite a few other topics as well.
Biden became president, thanks to Covid and because he was not Trump.

Apparently, that’s not enough to be re-elected. The world might change in two years and six months, but the reality is indeed, once again, mass shootings are not a game changer.

The question is: what is a game changer?