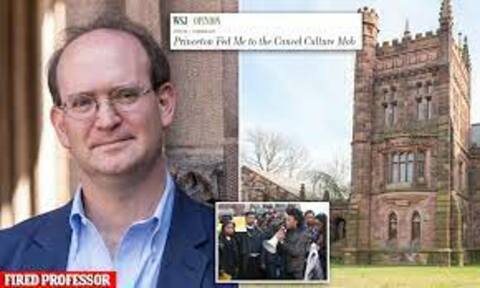 ‘Solveig Lucia Gold was setting the table in her backyard, next door to the house once occupied by Albert Einstein. Her yard is a sweeping field of emerald green grass leading down to the 18th-century blacksmith’s cottage with stone floors that houses her home study.
Ms. Gold, 27, was preparing for an intimate dinner with some of the few people — “our little cabal,” she said — who publicly admit to being on friendly terms with her and her husband, the recently fired (she prefers “canceled”) former Princeton classics professor Joshua Katz.
Most of the guests were much older than Ms. Gold. This included Dr. Katz, who is 52 and was once her professor. They married last July, four years after she finished Princeton with a summa cum laude degree in classics, and one year after Dr. Katz began his public fight with the campus left.’

‘The trouble began on July 4, 2020, when a group of Princeton faculty sent a letter to the university’s president, demanding that the university combat institutional racism. “Anti-Blackness is foundational to America,” it declared.
Four days later, Dr. Katz responded with a manifesto, “A Declaration of Independence by a Princeton Professor,” in Quillette, which is something of a house organ for the so-called Intellectual Dark Web. He took issue with proposed changes that would “lead to civil war on campus and erode even further public confidence in how elite institutions of higher education operate.”’

‘A certain amount of prurient interest accompanied the revelation that the Princeton professor who’d lost his job over a relationship with one former student was now married to another. Ms. Gold doesn’t shy away from it. On her Twitter account, her avatar is a photo of herself in a wedding dress, and the background picture is of her with a group of Princeton professors, including her husband.
And when Dr. Katz lost his job, Ms. Gold promptly published an essay about their relationship in Common Sense, the newsletter run by Bari Weiss, a former writer and editor for the opinion department of The New York Times. (“My alma mater is not the school I once loved,” went part of the headline. “But Joshua Katz is exactly the man I knew I married.”)
“He’s young at heart, and I’m an old soul, and it works,” Ms. Gold said later.’

‘“Solveig” — it’s pronounced SOL-vay — “has always received a lot of favorable male attention,” said her best friend from Princeton, Claire Ashmead, now a medical student at the University of Michigan. “She’s very feminine — I might describe her as ultrafeminine.” At the same time, Ms. Ashmead said, “she never pretended to be dumber than she was.” The relationship surprised Ms. Ashmead. “What made me come to terms with the fact that Joshua was the partner she had chosen was that I don’t think any of the guys she had dated were her intellectual equal,” Ms. Ashmead said. “They are intellectually so well matched.”’

‘But Ms. Gold has in fact drawn controversy of her own in the academic world. The summer after graduation, she engaged in a very public debate with Dan-el Padilla Peralta, an associate professor of classics, a historian of Rome, who has argued that the discipline of classics has contributed to the invention of whiteness and to its domination.
In an essay entitled “The colorblind bard,” published in The New Criterion, Ms. Gold invoked Dr. Padilla, who is Black and a Dominican immigrant, as evidence that “Western Civilization does not belong to white men.” In a fierce public exchange of letters after that, he criticized her for using him as a “signifying monkey,” the way, he wrote, some people will claim a token Black friend. (Dr. Padilla did not return emails and calls for comment.)’

‘Dr. Katz previously had a cultural interest in religion, but her faith has rubbed off on him. “I don’t think he ever had taken seriously the idea of actually believing in anything until he started dating me,” she said. Both of them have published in First Things, a conservative religious journal founded by her godfather, Richard Neuhaus.’

‘Ms. Gold said she once aspired to be a cross between Professor George and Mary Beard, the iconoclastic Cambridge University popularizer of classics. Now she is less certain that she has a future in the academy, but would like to write about public issues.
They are going to start house-hunting in Washington, D.C., where Dr. Katz is a fellow at the American Enterprise Institute. “Somehow one thing led to another and he ended up in the position that I had imagined for myself,” his wife said.’

Anton Chekhov? Flaubert? Balzac? No Balzac. Kingsley Amis. Everything is here.
The prudery, the provocation, the academic setting, the secret and not so secret lust, the ambition.

Houellebecq, but it’s too American for Houellebcq.

How does the tale end? I hope with lots of decadence.