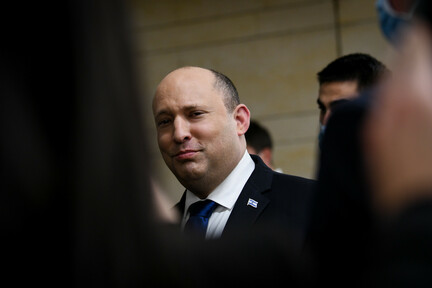 On religion and politics – Pfeffer in Haaretz:

‘They, and most of their rabbis, lambasted Bennett as the leader of a government intent on destroying religion. Ultra-Orthodox politicians literally called for him to take off his kippa. Bennett’s devout critics ridiculed the size of his skullcap and insisted that he was at most “dati-lite” – fake religious.
But it’s not just them. It’s fair to say that, early on, the government’s supporters also stopped seeing him as a religious prime minister.

The truth is, Bennett never saw himself as a religious politician to begin with. He began his political career as Benjamin Netanyahu’s chief of staff, and if he hadn’t fallen out with Sara Netanyahu – who urged her husband to block his career path – he would have become a Likud candidate.
He ran for the Habayit Hayehudi leadership only after he realized it was his only viable political platform. However, he was at loggerheads with the party’s rabbis basically from the moment he won the primary, over his attempts to open the party’s ranks to secular members and candidates, and his reluctance to accept their guidance in general.’

‘Bennett’s Yamina received only seven seats in the last election in March 2021, because ultimately there’s not much space on the right between the Netanyahu cult that is today’s Likud and the naked Jewish supremacism being offered by Smotrich and his neo-Kahanist partner Itamar Ben-Gvir. In addition, he was competing for that space with two other anti-Netanyahu right-wing parties: New Hope and Yisrael Beiteinu.
Bennett, the first prime minister to come from the national-religious community, proved that this community didn’t need or want a party of its own. Its members are secure and confident enough in their position within Israeli society.
Furthermore, they have no interest in constantly checking to see whether their representatives cover their heads because, unlike their parents, that’s not the main thing they look for in a politician anymore. Many of them have already moved to the “invisible kippa,” and don’t want it to define them either.
Religion and Jewish identity are, of course, major forces in Israeli politics and will be utilized to the max by Netanyahu and his alliesin this election – particularly to single out their enemies in the rival camp as being unfaithful to Israel’s “Jewish character.” But at the same time, there is a counterforce of Israelis who are observant or traditional, or just dabbling in their private lives, while not wanting this to be one of their defining characteristics in public.
Bennett is the representative of a growing group of religiously fluid Israelis who don’t think it’s anyone’s business what they believe or how they pray. But he can’t bank on their votes because the whole point is that they’re much too politically diverse for any one party. Ultimately, that’s the reason he’s taking a time-out from politics and not running in the next election.’

An interesting analysis, but the how serious is the decline of the religious influence in Israeli politics, especially when the haredi population is now about 12 percent. There were about 30.000 Haredim in 1948, about 4 percent.
If religion is not the dividing factor anymore in Israel this might also mean that the non-religious have left, which is not really good news for the country, needless to say.

And there is a chance that the Netanyahu-cult is coming back to the center of power in Israel in November. I give Netanyahu a better chance of making a come-back than Trump-cult, but with people like DeSantis waiting in the wings, that’s hardly a relief.