Complexity of a situation 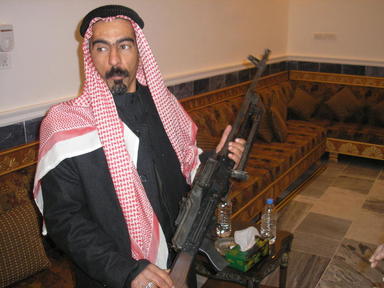 Some of my recent posts and pictures seemed to have caused misunderstandings by some readers.
This is meant as a clarification.
I’m presently in the so-called “Sunni Triangle” – although I have not been shot yet this is still considered a war zone.
The friendly atmosphere on some of my pictures might be misleading.
I don’t enter a sheik’s house for tea or lunch alone or with a single lieutenant; we enter a house with a platoon sometimes added with Iraqi forces. While some of the members of the platoon sit down and take off their helmet, sometimes even their flake jacket, others will stand guard.
When a sheikh was showing me his house I was immediately being followed by an alert sergeant to ensure my safety. There is a bounty on my head, on the head of the servicemen and above all on the head of the interpreters.
The suggestion that I can wear a white shirt or take off my shoes is in these circumstances somewhat ridiculous.
That we are having tea with a sheikh does not necessarily mean that the sheik is “friendly”. Quite a few sheiks are equally friendly with U.S. forces and with those who oppose the U.S. forces.

On at least one occasion we had tea with a wanted “terrorist” but there was not enough evidence to arrest the man. According to the interpreter this man has killed many Shia - just a small example to highlight the complexity of a situation that seems to be nothing but a cozy photo.
None of the Iraqi interpreters or the Iraqi forces will take off their shoes while entering a sheikh’s house; some will not take off their flake jacket.
It is a thin line between ignorance and malevolence but some ignorance is at the end just sheer malevolence.