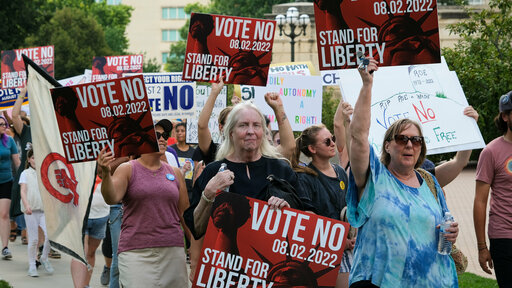 ‘The sweeping victory for abortion rights in Kansas on Tuesday — the country’s first post-Roe vote on the issue — relied on a broad coalition of voters who turned out in huge numbers and crashed through party and geographic lines to maintain abortion access in the state. The result was an election with a stunning 18-point margin that is shaking up national politics ahead of the midterm elections.
Abortion rights supporters used conservative-sounding language about government mandates and personal freedom in their pitch to voters, and made a point of reaching out to independents, Libertarians and moderate Republicans.
“Some of these issues really are nonpartisan — people don’t see it through the partisan lens the way a lot of us do,” Ashley All, a spokeswoman for Kansans for Constitutional Freedom, which led the effort to defeat the amendment, told reporters on Wednesday. “We were able to engage folks in a nonpartisan conversation about this issue, and that is something I think that really played to our strengths.”’

‘Republicans in the state hold commanding legislative majorities and have long campaigned on restricting abortion. The Roman Catholic Church donated millions of dollars to the effort to pass the amendment. And the issue was strategically placed on the August primary ballot, a time of year when Kansas Republicans usually have competitive races, but when Democrats and political independents often have little to draw them to the polls.’

‘The victory, however, reflects the state’s specific brand of politics: conservative and pragmatic, with an independent streak that often defies expectations. The state hasn’t supported a Democrat for president since 1964, but routinely elects Democratic governors.’

‘The abortion rights victory included overwhelming margins on Kansas’ few patches of left-leaning political turf: 81 percent to 19 in the county that includes the college town of Lawrence; 74 percent to 26 in the county that includes Kansas City; and 68 percent to 32 in populous Johnson County, a suburban area that was once reliably Republican but that has trended rapidly toward Democrats since Mr. Trump’s entrance into national politics.
But the abortion rights side also won convincingly in the county that includes Wichita, a more conservative place with a long, sometimes violent, history at the center of America’s abortion debate. Abortion rights supporters won in Topeka, the politically mixed state capital, and in Republican-leaning areas around military bases. Perhaps most surprising, they carried several rural and exurban counties where Republican candidates routinely trounce Democrats.’

‘Value Them Both, a group that led the vote-yes effort, reported raising $2.45 million this year from the Archdiocese of Kansas City, Kan., which Archbishop Joseph F. Naumann leads, and about half a million from the Diocese of Wichita. Churches held vigils, and parishioners donated money, which he hoped would offer an example to other dioceses on how to engage the issue.’

‘Archbishop Naumann said some Kansans would feel “buyer’s remorse,” as the state would increasingly become “a destination state for abortion.” Two bordering states have now banned the procedure in nearly all cases, and, even before Roe fell, nearly half the women who received abortions in Kansas lived elsewhere.’

The money that the Catholic church is pouring into the anti-abortion fight is interesting, a rather progressive pope or not, for the church abortion is still a primary battle.

But many Catholics see this differently, and abortion might not be the right issue to galvanize lots of undecided voters into voting for Republicans.

Kansas is Kansas still, but the still, the margins by with the pro-choice movement won are telling.

Conservative language about government mandates and personal freedom appeared to be powerful. If you believe that government is mostly the problem, you want government also out of your bedroom.