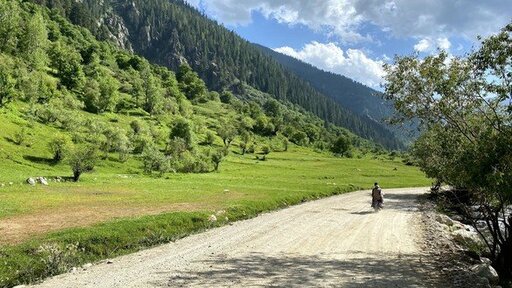 ‘Places like Barg-i Matal, Kamdesh, the Shok Valley, almost the entire province of Nuristan, would only pop up in grainy footage from the helmet cameras of American soldiers fighting fierce battles with invisible enemies. They never managed to bring the area under control.’

‘Those who apply for accreditation in Kabul for a particular province are technically allowed to travel there, at least in theory. But who really rules Nuristan's mountains? Western security sources reported as early as March that Islamic State (IS) had already re-established itself in some valleys near the border to Pakistan. And IS terrorist commandos have been blowing up mosques in Kabul, Mazar-i-Sharif and other cities with disastrous frequency for months now, even during Friday prayers.’

‘Today, Asadabad is a stopover where travelers switch into pickup trucks. The rocky road begins a few kilometers behind the city limits. The "Nuristan Highway," which the people governing the region proudly talked about building for years, has disappeared somewhere in the black hole of corruption. Only a dusty, rocky path leads along intermittent rivers to Nuristan, a province created just under 130 years ago whose name means "land of light." Before that, this was Kafiristan, the land of the infidels, because the steep, forested valleys had offered protection from the Muslim rulers and their armies for centuries. In Kafiristan, they still believed in gods embodied by carved gazelles and helmeted horsemen until the troops of the "iron emir," Abdul Rahman, from Kabul subjugated them in 1895 and forcibly converted them to Islam.’

‘Western journalists can still travel through Afghanistan without encountering too many difficulties. They may only experience small parts of the country, but they at least get an accurate picture of what is happening there.
In the heart of Nuristan, in the small main town of Parun, which the Kabul government could essentially only reach by helicopter for years, the Taliban flags also fly, but so does the old Afghan state flag. The same is true days later in Kamdesh. "We, the original inhabitants, were never actually against the government," elders in both towns say. "But nobody in the rest of the world, even in Kabul, noticed that. All the access routes were in the hands of the Taliban, al-Qaida and other groups, who sometimes denied us passage for months."’

‘It isn’t until the second evening in Parun's only restaurant that a traveling salesman from Khost, deeper in the south, begins to tell of the hardship beneath the apparent normality. "We export pine nuts," he says, explaining that they are a commodity in such high demand that farmers get down payments even before the harvest. "Before, there were trade agreements and we were able to export them all over the world. Since the Taliban have been back in power, though, the borders have been sealed. Our only option is to smuggle them to Pakistan, for a fraction of the price."’

‘The great dramas of Afghanistan begin in the foothills of Nuristan. The state had hardly had a presence here before either. There had never even been a mobile phone network outside the Parun town limits. The villages produce electricity themselves with small turbines along the rivers. One primary school principal notes that a high school for girls has never existed here, meaning it can't now be closed by the Taliban.
It’s not as if things have changed for the better, he says with a sigh. They weren’t good here before either.
It’s other things that have changed: In Parun's only restaurant, a young member of the Taliban comes at noon and asks all the guests to come to the mosque to pray. He exchanges a few words with the owner and then calls out: "Well, anyone who isn’t eating must go and pray." But everyone here is eating, including the Taliban commander from a neighboring village. No one leaves.’

‘In the past 20 years, the rest of the world has perceived Afghanistan exclusively as the site of a war waged by the Taliban against Western troops and governments in Kabul. But underneath that there were and are countless small, but no less deadly, petty wars. These feuds are not over who controls the state, but over who owns pastures, forests and water. Like in Kamdesh, where the two sides couldn’t agree on who had which rights to the largest spring in the valley.’

‘"I was in the secret service!" one told me. "I was in the Special Forces and traveled with the Americans," confessed another. Hiding here in the middle of nowhere in Nuristan, they discuss their hope of somehow getting to the United States. They make us swear we won’t tell anyone else and then they talk their heads off.
"But why are you telling us all this?" we ask each time, bewildered. "Because I HAVE to talk to someone about it," the answer always goes, or something similar. "You’re strangers, I can trust you! Otherwise, I'll go insane."’

Christopher Reuters is an excellent war correspondent. This short article tells you a lot about Afghanistan and why the war of twenty years have yielded so little. One of the problems of the war was that the aim of the war have been unclear from almost the first day of course.
Should Afghanistan have become like let’s say Alabama? Was Afghanistan, as some insisted, just a strategy to encircle Iran? That strategy failed. Iran probably will have a nuclear bomb soon, at least that appears to be the assessment of the Israeli intelligence community.

The double moral standard of the Taliban reminds me of Hezbollah, with whom I spent some time in 2007. Most religious fanatics love to fornicate and to drink, Mike Pence might be the exception.

And the former allies of the West, waiting for a visa, another tragedy still going on.

The Netherlands are still ‘shipping’ Afghans, who had been working for the Dutch troops, quietly to The Netherlands, Flights leave from Pakistan. Which is to say that there must be an agreement with the Taliban about this matter.