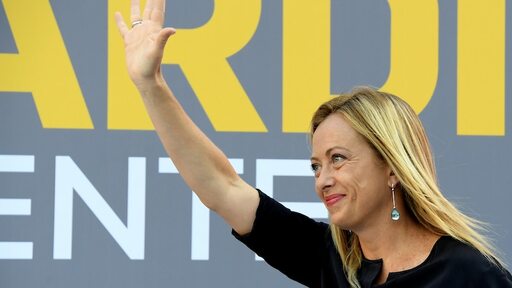 On respect – Ariel David in Haaretz:

‘For the last two years Italy has been governed by the widely respected Mario Draghi, the former European Central Bank Governor, backed by a coalition that included almost every party in parliament, including the xenophobic League party and the grassroots anti-establishment Five Star Movement. Many voters stayed home Sunday over frustration that Draghi’s government, as well as the previous two cabinets, emerged from political backroom deals rather than the ballot box. And while Draghi has well managed the country’s exit from the COVID-19 crisis, Italy’s economy is once again taking a hit amid rising inflation and record energy prices linked to Russia’s invasion of Ukraine. Add to this that Draghi himself didn’t run – respect for technocrats rarely translates into votes – and the mainstream center-left was unable to present a united front and credible leadership.’

‘She uses the fascist-era slogan “God, homeland, family” to call for the protection of “traditional Christian values,” and belittles people who suffer from drug addictions, alcoholism, obesity and anorexia as “deviants.” Her favorite dog whistles at rallies include "Yes to the natural family, no to LGBT lobbies!" and railing against “global elites” and “international finance.” Meloni has ruthlessly and shamelessly pursued the protest vote, essentially saying whatever it took to gather under her banner anyone who had a gripe against the national unity government. During the darkest days of the COVID-19 crisis she flirted with anti-vaxxers and opposed Italy’s “green pass” measures, even though she had previously come out in favor of inoculations. That same ambiguity can be seen in the crisis over the war in Ukraine: while she has supported NATO and sanctions on Russia, in her 2021 memoir she also expressed admiration for Russian President Vladimir Putin, who she claimed “defends European values and Christian identity.”’

‘If her government lasts (and that’s a big if), Italy won’t be returning to Mussolini’s time, but it will be a less liberal place that will attempt to curtail abortion rights, freedoms for migrants, LGBTQ people and other minorities. Together with the other populist forces rising in Europe, Meloni is also likely to continue to weaken and undermine the EU’s values and institutions, reinforcing the wave of nativism and nationalism that has been sweeping the continent.’

That’s a relief, no return to Mussolini’s time.

If respect for technocrats doesn’t translate into votes, the question is what exactly is it that translates into votes? The delightful promise of fascism-light, the comfort that there are once again several scapegoats on the horizon?