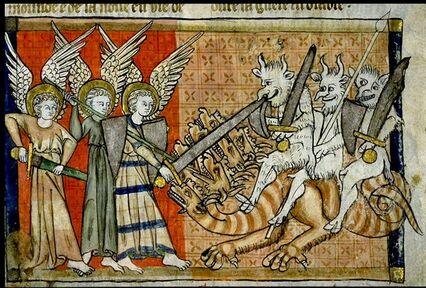 On the End - Michael Robbins in Harper's Magazine:

‘In the decades following Jesus’ death, the apocalypse2 was believed to be so imminent that Paul felt he had to hurry, complaining that barely had he begun to spread the gospel in one place when another beckoned to him. In the first few centuries of the Christian era, the world was “a dark house full of war,” as Anthony the Great wrote from the desert, and heavy shit was being revealed to prophets all over the place. Some of it has been passed down in text, such as the Secret Book of John, to whom “a figure with several forms within the light” appeared to tell of “what is, what was, and what is to come, that you may understand what is invisible and what is visible; and to teach you about the unshakable race of perfect humankind.”’

‘I’ve always liked them—the ranters, revivalists, the killer messiahs and flipped-out founders of communes. The camp meetings in the woods where young people would bark and howl and writhe on the ground and fall into trances that lasted for days. Jonathan Edwards in full gallop, reading the chiliastic signs.
I’ve been thinking about all this lately for obvious reasons. We live in a dark house full of war. Not that I anticipate the Christian eschaton—who needs divine revelation when you can google “more plastic than fish by 2050”? Nor have I been “black-pilled.” I didn’t ask to get “Eve of Destruction” stuck in my head. I desperately want us to get our shit together. We could build a free society that doesn’t view the planet as a profit engine. I just really doubt that we will. Climate disaster, economic collapse, war, resurgent fascism and nationalism, assaults on basic political freedoms, mass violence: all these mutually reinforcing in a sinister feedback loop, the structural stresses of capital’s death throes accelerating ecological catastrophe and exacerbating reactionary forces, which in turn further stress the structure. The collapse won’t be a single event, but a slide into what the world-systems analyst Giovanni Arrighi calls “systemic chaos.” Late-capitalist society is a coyote suspended above an abyss, believing he still stands on solid ground. We are in the interval before he notices he’s supported by thin air and plummets to the canyon floor.’

‘ I knew what an eviction notice was, I knew how to use food stamps, I knew not to trust cops. It was erratic; everyone was unstable. Still, wasn’t there something romantic about this pitiful rejection of what they called “the straight world”—or is it just nostalgia that makes me think so? But T. J. Clark calls nostalgia “that most realistic of interpretive tropes.”’

‘Expecting the apocalypse has been an American pastime since the colonial era. Marcuse wrote One-Dimensional Man in Massachusetts, not far from where Jonathan Edwards discerned the scriptural prophecy of the millennium “plainly to point out America, as the first-fruits of that glorious day.” Henry Adams decided that the second law of thermodynamics applied to human history as a closed system. “The apocalypse has been announced so many times that it cannot occur,” as the situationist Raoul Vaneigem put it in his book on the Brethren of the Free Spirit. The end of the world is always around the next bend. Look out of any window.
So I’d be foolish not to scatter some asterisks. “Beginning to be the end it seemed,” writes Nathaniel Mackey. “Ending begun to be come to again.” “The imagination,” said Wallace Stevens, “is always at the end of an era.” And Robert Frost: “It is immodest of a man to think of himself as going down before the worst forces ever mobilized by God.” Many ends of the world have come and gone. “When it appears that it cannot be so,” Frank Kermode noted in The Sense of an Ending, “they act as if it were true in a different sense.” What can I say, Frank, you got me.’

‘Today’s apocalyptic structure of feeling differs from its predecessors in that it is totally pessimistic. “Remain calm,” communist theorist Bifo Berardi advises readers. “Don’t be attached to life, and most of all: don’t have hope, that addictive poisonous weed.” Nuclear warheads may or may not fall from the skies. Ditto Jesus. But the planet will get hotter. Even in the most realistically optimistic scenario,4 coral reefs face complete die-off, sea levels rise, and entire species and ecosystems vanish. Extreme weather—storms, wildfires, floods, droughts—will become ever more commonplace. And of course it is the less optimistic scenarios that are more likely to come to pass.
Bulgakov denied that the “philosophy of history as the ‘philosophy of the end’ ” could be characterized as pessimism. “But neither is it optimism, for, within the limits of history itself, there is no resolution for this tragedy.” That is, nothing can be done until history is ended, in the transfiguration of the world through the parousia, the coming of Christ the King. At the risk of nullifying its true content, I would secularize, or historicize, Bulgakov’s insight.’

‘It is seventy-five years since Theodor Adorno and Max Horkheimer lamented the tendency of people to take the status quo, “which they themselves constantly create,” as given, “a fortress before which even the revolutionary imagination feels shamed as utopianism, and degenerates to a compliant trust in the objective tendency of history.” The Marxist Helmut Reichelt, paraphrasing Adorno, called this seemingly given fortress “an objective structure that has become autonomous.” We can still demolish this structure—though the hour is getting late—but instead we search within it (not very hard, it must be said) for ways to ameliorate its effects.’

‘What way will we throw our lives? The historian Mike Davis has imagined the horseman of pestilence telling a reporter on the White House lawn, “Your whole society is suffering from acute apocalypse denial.” The thing about wanting this world ended is you want it ended the right way. If we don’t end it ourselves, if we don’t stop those who are killing everything, it will almost certainly end quite badly, especially for the poorest and most subjugated among us. And what comes next could well be even worse. The George Floyd rebellion of 2020 remains, along with Occupy, Standing Rock, the Arab Spring, and several other scattered refusals to comply with the status quo, a bright beacon of possibility. But the disappointing issue of these, the reversion to the positive facticity of what exists—in no small part due to the other side’s overwhelming monopoly on naked force—conjures an image of the future in which, in solidarity with the dead, isolated subjects click to add shoes to their shopping carts forever.
And yet. Perhaps it is my early grounding in eschatology and the counterculture that allows me to see—not hope, not at all, but opportunity. Is it not when things are darkest, when all hope is lost, that one fights with abandon, shamelessly shoots for utopia? For then there is nothing left to lose. And I have heard that another word for nothing left to lose is freedom.’

A fairly insightful article about the history of the Apocalypse ends with the trite remarks of the counterculture of the sixties. Which was, as we know by now, more culture than counterculture.

Whether this age is darker than many other ages is for the historians to be seen. Most people believe that they live in dark ages, for being alive is seldom pure please, and the smallest pain in your toe will feel as an act of unforgivable cruelty from the gods, after all it’s your toe.

Adorno and Horkheimer had good reasons to despise the status quo after ‘45 in Germany. Adorno did some groundwork for the students in the 60 in the BRD (FRG) to speed up the denazification, interestingly enough those students also turned their backs on Adorno, for he was considered a leftover of the past, not suitable for consumption anymore. See here, just in German.)

Defending the status quo is a delicate task. It all depends on timing.
The violent removal of the powers that be is a violent task. I’m doubtful if that will improve the lives of the citizens and non-citizens. Especially now. Just look around you. And read some newspapers.

Foucault knew what the essence of revolution was: better sex is on its way.

I for one am willing to accept the not so great sex of the present.
Call me a dirty pig.