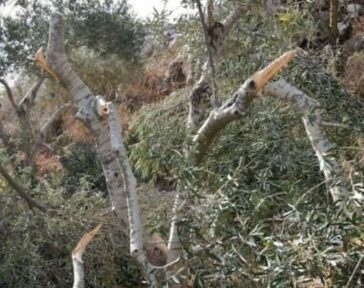 On another pogrom – Gideon Levy and Alex Levac in Haaretz:

‘Early in the morning of Thursday, November 3, six members of the family set out for their olive grove, about 5 kilometers (some 3 miles) from their home – 40 dunams (10 acres) of land from which the stones have been carefully cleared, on which 400 trees are growing. The hour was approximately 6 A.M. In the Toyota pickup were Ayid, his second wife, Afaf, 60, his daughter Maryam, his sons Mohammed, Hamad, 33, and Omar, 30, and Mohammed’s 8-year-old son Tair. They arrived at the grove, spread blankets beneath the trees to catch the olives, and started to harvest the crop. At 8:30 they stopped to eat breakfast.
About 2 kilometers from the grove lies the settlement of Asfar, which was originally established as a military outpost in 1983 and then handed over to ultra-Orthodox settlers; in 1992 they expanded their presence, creating an illegal outpost on land abutting Asfar. Only 60 meters separate the edges of the settlers’ unlawful farm from the olive grove. The Mashani family has suffered harassment on a number of occasions at the hands of the settlers, but what happened that day a few weeks ago outdid all previous attacks.’

‘“Why are you making such a mess?” asked Avraham, the leader of the pogromists, whose name they know from previous incidents. The elder of the group, bespectacled, potbellied and sporting a large black kippa, he addressed Ayid in the tone of a Shin Bet security service interrogator.
“I am on my land – what mess?” Ayid replied, trying to head off a confrontation.
Put down the camera, Avraham ordered the photographer with a dismissive gesture. “Come on, come on, no cameras,” he barked, like a gang boss.
Ayid says this week that in his opinion, Avraham had wanted to force him onto the road and not clash with him on his own land, in the grove, to bolster the claim later he had not been trespassing and that it was the Mashanis who initiated the attack on the settler-elder.’

‘In the meantime, an all-terrain vehicle arrived with three more settlers, armed with revolvers, one also carrying a rifle. “We weren’t frightened, we’re used to it,” Mohammed says now. According to him, Avraham attacked Ayid and the two fell to the ground. One of the settlers standing behind them struck Ayid on the head with an iron pipe as he lay there. Stones then started to fly from all directions at the family. Two settlers with two terrifying dogs joined in the festivities, one of them sicced a dog on Mohammed – he shows us the bite marks on his left thigh.
A settler grabbed a large iron rod from the Mashanis’ truck and used it to hit Mohammed’s right leg, shattering it. Mohammed lost consciousness at that point. Maryam, and Ayid’s wife Afaf tried to shield him from further harm, before a rock slammed into Maryam’s arm and broke it. A stone hit Hamad’s ear and perforated the eardrum, his brother Omar was punched in the eye. Ayid still sports a bruise caused by someone’s fist below his eye, in addition to his head wounds, which caused a concussion.
As Mohammed recounts the events of that day, he shows us one by one the relevant wounds and scars on his body; his right leg is bandaged and he can’t stand on it. He recalls feeling as if the leg was hanging in the air, dangling, detached.’

‘Most of the olives remained on the trees in the family grove until this past Tuesday when, in coordination with the army, the family was able to go about harvesting their crop.’

The Hebron settlers are among the worst, judging from my trip with Breaking the Silence in 2016.

And needless to say, not all settlers will resort to these kinds of pogroms.

It’s a pity that the Levy and Levac didn’t ask the perpetrators for a reaction. That the possibility of a police or army investigation is not even mentioned in this article is a sign of the impunity with which the 'masters' can abuse the 'lesser humans'.

Also note that the Mashani family could harvest the olives under the protection of the army.

At least since the assassination of Rabin the danger of the extreme-religious right should have been clear. The danger is still there to be seen for everybody with eyes. And the cuddling with the extremists of Likud under Netanyahu – God knows he is not an exception, quite a few other political parties in Israel joined openly and less openly in the act of cuddling – makes an outburst of violence only more imminent.
'Smaller acts' of violence that have been hardly noticed in the international media are not less violent of course.