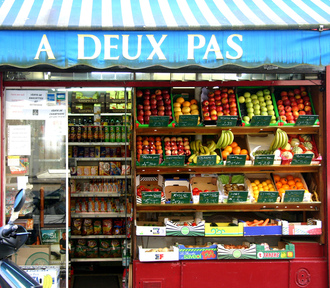 For the first time in weeks, no months, I went alone to the movies. I saw the French movie “The Grocer’s Son” – not a great movie but charming and a convincing commercial for life in small villages in the southern part of France.
The movie is about a man who has a mobile and a stationary grocery.
The interesting thing is that the movie is arguing that running a mobile grocery and selling tomatoes to old people in a small village is an utterly romantic thing to do – maybe even a noble thing.
On a different note, the Sunday Magazine of the Times published an amusing interview with Mr. Thurman, a profesor of Buddhist studies: “What do you think about when you meditate? Usually, some form of trying to excavate any kind of negative thing cycling in the mind and turn it toward the positive. For example, when I am annoyed with Dick Cheney, I meditate on how Dick Cheney was my mother in a previous life and nursed me at his breast.
You mean you fantasize about being breast-fed by Dick Cheney? It’s a fantasy of releasing fear and developing affection. It’s a way of coming back to feeling grateful toward him and seeing his positive side, finding the mother in Dick Cheney.”

This is important. Do you dislike a person? Let’s say your ex-girlfriend or your ex-boyfriend.
Think of this person as somebody who was your mother in a previous life.
In general the thought that Dick Cheney is breast-feeding you is a healthy fantasy for any adult.