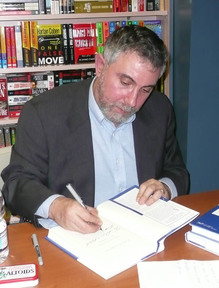 ‘Paul Krugman, a professor at Princeton and an Op-Ed page columnist for The New York Times, was awarded the Nobel Memorial Prize in Economic Science on Monday.
The prize committee cited Mr. Krugman for his “analysis of trade patterns and location of economic activity.” Mr. Krugman, 55, is probably more widely known for his Op-Ed columns in which he has been a perpetual thorn in President Bush’s (and now John McCain’s) side. His columns have won him both strong supporters and ardent critics.
The prize, however, was awarded for the academic — and less political — research that he conducted primarily before he began writing regularly for The Times.
“To be absolutely, totally honest, I thought this day might come some day, but I was absolutely convinced it wasn’t going to be this day,” Mr. Krugman said in an interview on Monday. “I know people who live their lives waiting for this call, and it’s not good for the soul. So I put it out of my mind and stopped thinking about it,”’ writes Catherine Rampell in the NY Times.

I like Mr. Krugman’s Op-Ed columns a lot and I enjoyed his comment in Catherine Rampell’s article as well. It is not good for your soul to wait for the Nobel Prize.