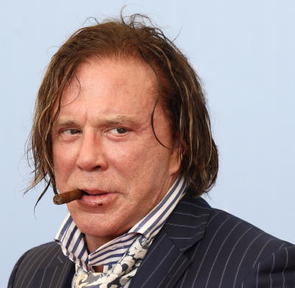 The movie “The Wrestler” is a portrait of the wrestler as a slightly older man. On Sunday night the audience in Lincoln Plaza Cinemas didn’t seem to be totally convinced by “The Wrestler” but I was happy to have indulged in the world of wrestling on a cold Sunday night.
After forty minutes I was afraid that the movie would descend into sentimental territory – a wrestler, a daughter and a stripper, God cannot be far away – but thank God there is not much redemption to be found in this story.
My favorite scenes took place in the meat department of a supermarket where the wrestler (Mickey Rourke) finds a daytime job after a heart attack prevents him from continuing his wrestling career.
He could have become employee of the month, so much is clear, he knows how to put a smile on the faces of his clients, but at the end self-destruction is a matter of pride.