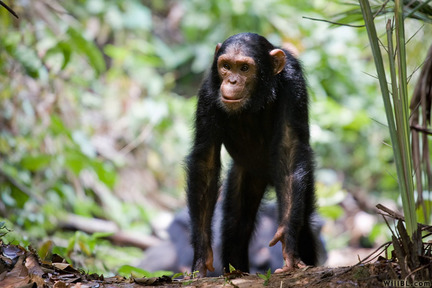 A friend alerted me to an article in the Times about deceit in the Animal kingdom.
Here are my favorite paragraphs:

‘In a comparative survey of primate behavior, Richard Byrne and Nadia Corp of the University of St. Andrews in Scotland found a direct relationship between sneakiness and brain size. The larger the average volume of a primate species’ neocortex — the newest, “highest” region of the brain — the greater the chance that the monkey or ape would pull a stunt like this one described in The New Scientist: a young baboon being chased by an enraged mother intent on punishment suddenly stopped in midpursuit, stood up and began scanning the horizon intently, an act that conveniently distracted the entire baboon troop into preparing for nonexistent intruders.’

And: ‘Great apes, for example, make great fakers. Frans B. M. de Waal, a professor at the Yerkes National Primate Research Center and Emory University, said chimpanzees or orangutans in captivity sometimes tried to lure human strangers over to their enclosure by holding out a piece of straw while putting on their friendliest face.
“People think, Oh, he likes me, and they approach,” Dr. de Waal said. “And before you know it, the ape has grabbed their ankle and is closing in for the bite. It’s a very dangerous situation.” Apes wouldn’t try this on their own kind. “They know each other too well to get away with it,” Dr. de Waal said. “Holding out a straw with a sweet face is such a cheap trick, only a naïve human would fall for it.”’