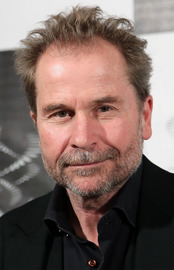 Ulrich Seidl, enfant terrible of European cinema. As a young child, Seidl’s parents had set their hopes on his becoming a priest, but Ulrich Seidl would follow a different path altogether, becoming one of Europe’s most celebrated yet controversial film directors. His darkly themed films and documentaries—from Hundstage to the acclaimed Paradies-trilogy—confront the viewers with society’s cruel edge. Seidl’s images grate and embarrass, leaving its audience squirming in their seats.
What drives Ulrich Seidl in the making of these confrontational works? Famous Dutch writer Arnon Grunberg enters in conversation with the Austrian filmmaker, discussing his life, work, and inspiration, touching on questions such as: what is the director’s role in Europe, and what is the current state of Europe’s society? How does Ulrich Seidl, with his unique view on societal issues, reflect on today’s Europe?