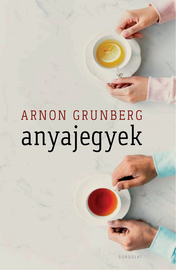 The protagonist of Arnon Grunberg's new novel, Otto Kadoke, works as a psychiatrist in a crisis center. As a specialist in suicide prevention, his job is to keep people alive who no longer want to live. One summer, when he visits his needy mother, one of the young Nepalese caregivers opens the bathroom door wearing only a towel. Kadoke, who has struggled his entire life to keep from crossing borders, loses his head this time. As a result of the incident, he will have to deal with his mother's care himself.

After another crossing of the border, triggered by a young woman with a suicidal tendency, the psychiatrist finds herself crashing down on both his professional and private life, and his mother's house is slowly starting to resemble a crisis ambulance itself.

Anyajegyek is a ruthless novel about a man’s love for his mother and father, and about two people who can't live - or die - without one another.