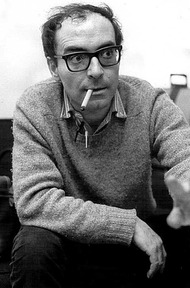 Manohla Dargis writes in The Times: ‘Wittily, perversely, contrastingly, the final words in the movie are “no comment,” which appear in large English letters like a declaration, bringing this 1 hour and 41 minutes of sights and sounds to an abrupt close. Mr. Godard, 79, was scheduled to appear at a press conference after the screening, but made good on these last words by not showing up. Though the rumor that he would be a no-show had circulated before the screening, several dozen journalists trooped to the press room to see if a representative might appear with an explanation. Nothing. Not even a note. No comment.
According to the French newspaper Libération, Mr. Godard sent a fax to the festival’s director, Thierry Frémaux, saying that “problems of the Greek type” (“des problèmes de type grec,” perhaps referring to Greece’s financial crisis) had prevented him from attending and that he would go to his death for the festival, but not one step more: “Suite à des problèmes de type grec, je ne pourrai être votre obligé à Cannes. Avec le festival, j’irai jusqu’à la mort, mais je ne ferai pas un pas de plus. Amicalement. Jean-Luc Godard.”’

What on earth are “problems of the Greek type”?