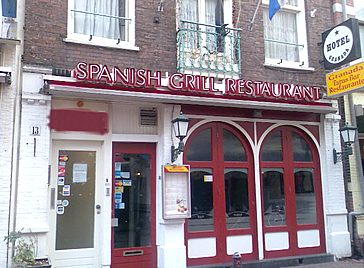 Last night after a discussion on nihilism and drinks at a party thrown by a Dutch newspaper two friends and I decided that we had to eat something before we could go to bed.
We ended up in a small Spanish restaurant near the Leidseplein.
The restaurant was almost empty.
Three Dutch women were sitting at a table – a heavy black man was playing the guitar.
Another black man who turned out to belong to the restaurant started dancing with two of the women. His dancing reminded me of “dirty dancing” but I have to say that in my eyes most dancing is dirty.
The tapas, shrimps, potatoes, anchovies, squid, were mediocre. The wine was mediocre. The ambiance was fascinating. Dinner for three including tip but without dessert: 50 euros.