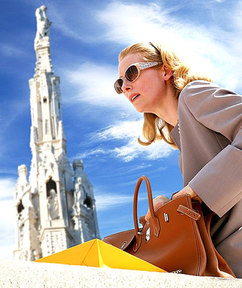 A friend told me that she thought that Luca Guadagnino’s movie “I am love” was the best movie she had seen this year.
It’s not a bad movie at all, but I was not as enthusiastic as my friend.
“I am love” (the title borders on tackiness, but so does the first half of the movie) is based on a few premises:

The movie is worth seeing, especially because of the last twenty minutes.

And it confirmed something a friend told me over lunch: if you want to pick up a woman on the New York subway start reading a cookbook. To avoid misunderstandings: the movie isn’t set in New York, but food plays an important role in "I am love".