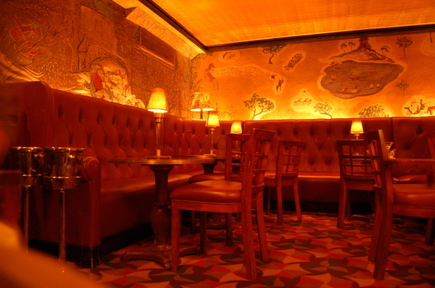 On Monday night I had drinks at Bemelmans with a Spanish poet.
The poet presented himself as a Casanova who believed that time has come for penitence.
He turned out to be extremely pleasant company.
At a certain point he said: “Look, they are torturing this woman.” First I thought that he was joking, but indeed, a slightly overweight woman who appeared to be in her forties was handcuffed by a heavy black man, after that she started crying and then she was quickly led away.
The pianist played along, everybody acted as if it’s totally acceptable to handcuff slightly overweight women in an upscale bar.
The Spanish poet asked a waiter: “Excuse me, but what did the lady do? Was she a thief?”

Tonight a friend told me: “Perhaps the Carlyle Hotel [Bemelmans is part of the Carlyle] doesn’t want to have slightly overweight prostitutes on its premises. You can be a working girl, but you should be presentable.”

If this is the case we should protest. There are human rights.