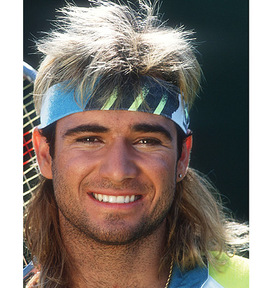 Michael Kimmelman reviews Andre Agassi’s autobiography in The New York Review of Books. He writes: ‘Soon he takes to wearing a ridiculous hairpiece to disguise the truth that he’s balding. When he reaches the finals at the French Open in 1989, he panics about the hairpiece falling off, then loses the final of the US Open, then another final in Paris, then even the will to win, until out of the blue, against a strong field of grass court players, he captures Wimbledon in 1992. His father is silent when Agassi phones to celebrate.
“You had no business losing that fourth set,” is all Mike musters, but then Agassi hears the faint sound of sobbing.’

Probably Agassi’s hairpiece is public knowledge, but I have never been interested in the hair loss problems of tennis players.
I’m not going to read Agassi’s autobiography, but the paragraph above made me almost weep. No, made me want to write a short story about the athlete and his hairpiece.
Yes, I know I’ve written a book (under pseudonym) titled “The Story of my Baldness” but hair loss is a problem that cannot be solved in one novel.