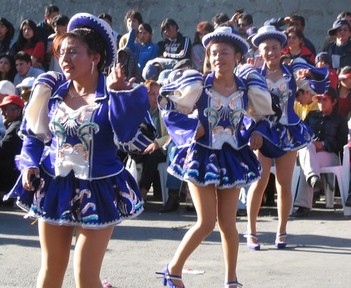 My godson’s grandmother is visiting him from Bolivia. She speaks only Quechua and Spanish, but he speaks some Spanish as well and he is willing too learn Quechua.
Last week I picked him up from his school in Amsterdam to have lunch with him. He is 7 years old.
One of the teachers there started a conversation with him, she commented on his grandmother who brings him to school every morning.
“I admire your grandmother’s skirts,” the teacher said.
His grandmother’s appearance is by modern standards quite spectacular.
My godson nodded.
“When is she going home?” the teacher wanted to know.
“Next week,” he said.
“No,” I interrupted him. “She is staying with you for at least another two months.” This Saturday my godson’s grandmother will cook a Bolivian dinner, I won’t be there but my godson is hired as a waiter.