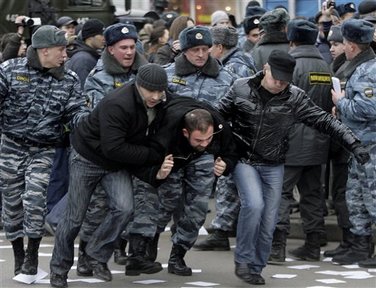 'Last week, Mr. Krylov, the computer repairman, described in a soft voice how he initially refused to confess to stealing $200.
“I told him I wanted a lawyer and would not give evidence without a lawyer according to Article 51 of the Constitution,” he said. “They laughed and asked how did I know it?” Mr. Krylov, a part-time student of law and criminal justice, told the police that he had a copy of the Constitution in his bag. It did not matter.
Over the two hours of interrogation, Mr. Krylov said, he was knocked off a chair and repeatedly slapped across the face. Then, he said, a police commander threatened to rape him.

The assault began with a pencil, but the commander, Aynur Rakhmatullin, was in a rage. “Where is a bottle? You must always have a bottle around,” the commander shouted at other officers, who found one, Mr. Krylov said.”'

You must always have a bottle around.