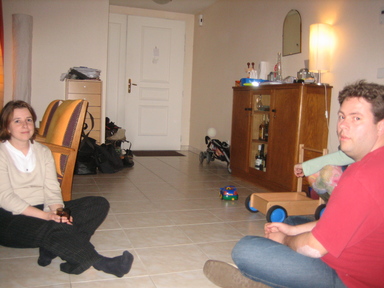 Last night my extended family and I traveled to the suburbs of Paris where my friend Sander, the designer of this website, lives.
His curry was outstanding and his son, the marvelous Yann, did seem to like my godson.
In the meantime my amante is in the mountains of France doing some snowboarding and she called me to say that she really has the feeling that she is having an affair with a married man with children.
After this phone call I finally understood why people long for a family. Everybody wants to create his own unhappiness.
They are not willing to join other people's unhappiness, which is as far as I'm concerned not always wise.