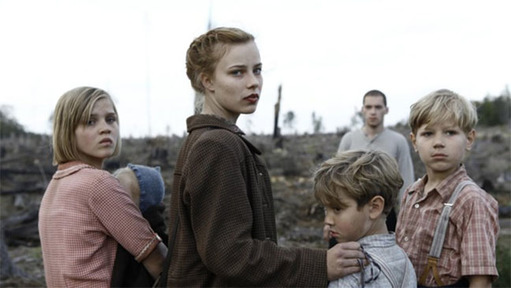 I celebrated Valentine’s Day by seeing a movie about World War II. (Word War II can also be your valentine.)
The movie “Lore” by Cate Shortland is one of the strangest movies about World War II I’ve seen. (Watch the trailer here.)
It’s 1945. Hitler just committed suicide. The children of high-ranking Nazi’s flee from their parental house in the Black Forest to their grandmother’s house near Hamburg. Lore, official named Hannelore (like my mother by the way) is the oldest.
“Lore” is a sultry movie. (The acting is remarkable.) Many things have been said already about the eroticism of Nazism and fascism. Cate Shortland makes the case that the end of Nazism was eroticized as well.
Stephen Holden called this movie “a dark fairytale”. (Read the review here.)
When it comes to representations of World War II we need less and less realism, we move in the direction of the fairytale, the dream, surrealism.